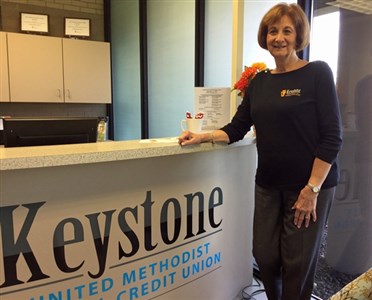 A lot has changed since Patti Columbe took over as CEO of Keystone United Methodist Federal Credit Union in January 2000. Columbe, who will retire at the end of 2015, has seen membership in the credit union increase by 40 percent during her 15-year tenure. She’s also helped take it from an organization serving primarily clergy and their family to one that serves as a partner in ministry with the Western Pennsylvania Conference and welcomes all church members and their families.

Columbe was the office manager of Heritage Valley Healthcare Credit Union in Sewickley when she heard that the local United Methodist credit union looking for someone to replace its CEO who was retiring. She phoned then-CEO Ruth Lawley, who told her that the Board of Directors had just held a strategic planning meeting where they prayed to find the right candidate to fill the position after having interviewed several who weren’t a good match.

“Ruth told me it was like an answer to their prayers because they had prayed so hard at that meeting for someone that would be a good fit for the credit union,” said Columbe.

One of the first things Columbe did in her new position was to improve the organization’s fiscal standing by overhauling its VISA credit card program. Ultimately, she was able to quadruple the size of the program within a couple years so that it became one of the credit union’s main income-producing products.

“Where I worked before, I had been very successful in initiating a VISA credit card program and a share draft checking account program,” Columbe said. “The visa program here was up and running, but it was small and unprofitable.”

The next change she implemented was to enable members to make loan payments and deposits electronically.

“I think within a year we started electronic deposits and payments. That was a big hit with our members because they didn’t have to remember to send that check every month,” she said.

Columbe helped form and became a charter member of the United Methodist Credit Union Association, an organization of UM credit unions from around the country.

“We did it so that we didn’t have to reinvent the wheel,” she said. “All of these credit unions had the same ideals and obstacles and we could learn from each other. It still holds true today as we meet and discuss annually.”

In 2003 she made perhaps the biggest change in the credit union’s history by opening the membership to church members in time for the organization’s 50th anniversary.

“I found that the other United Methodist credit unions were open to the people in the pews and I looked into why our charter was different and what I needed to do to fix it,” she explained. After approximately six months of filing the necessary paperwork and forms, the credit union became a resource not just for clergy, but to all United Methodists in the Western PA Conference.

Through the years Columbe has ensured that the credit union stayed competitive -- not only in rates, but also in services offered. Under her leadership, the organization has added a host of products and services to meet member needs, including checking, debit cards, online banking, mobile banking, electronic bill pay, shared branching, IRAs, mortgage and home equity loans, and member business loans for churches.

She has also worked in partnership with the United Methodist Foundation offering educational programs throughout the conference and helping churches build capital campaigns and secure mortgages and ministry loans.

More recently, she served as a team member on the Conference’s strategic planning committee and developed the credit union’s relationships with other conference groups, including the  Board of Pensions and Health Benefits. The credit union has since been chosen to become the primary financial institution for their Health Savings Accounts, thus enabling the organization to help even more pastors and church employees.

Of her many achievements, Columbe is most proud of the relationship that she helped to foster with the Conference and the Bishop's office. The credit union’s Mission Visa program grew out of this relationship. The organization tithes a portion of the proceeds from this program to help fund new churches in Western PA and has donated $70,500 to date.

“I’m very proud that we’ve built this relationship with our Annual Conference and we work so well together to help the people that we’re both committed to,” Columbe said.

Affectionately referred to as “Queen Bee” by her staff, Columbe feels she’s created a family among the credit union employees who are all committed to the organization’s mission of supporting ministry and changing lives.

“This has been built so that without me it should have no problem moving on,” she said.

Though Columbe is retiring from her full-time position, she’ll continue as a member of the Board of Directors and serve as their treasurer. She also plans to be available for consulting with the new CEO, Kasi Devinney, who will take over the helm as CEO in January.

Devinney currently serves as the loan officer and operations manager at KUMFCU  and earlier this year completed the three-year program required to earn the designation of Certified Credit Union Executive (CCUE).