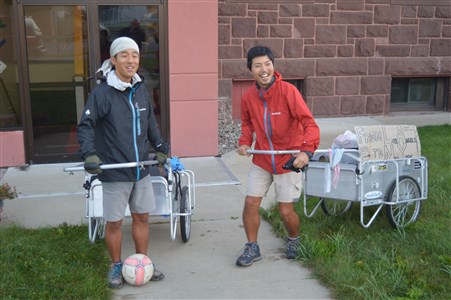 Rev. Tom Carr’s doorbell rang about 5:30 p.m. on Sept. 14 and two young Japanese men, each pulling a cart behind him, asked if they could camp overnight on the lawn of First UMC in Reynoldsville. They were just passing through on Route 322 – walking from Los Angeles to New York. One, Ryuta Ishibe, loves soccer and is kicking a soccer ball throughout the six-month trek.

Carr, the trustees who were meeting at the church that evening, and three women who had provided a meal after a funeral that afternoon didn't hesitate. They welcomed the strangers!

“It was a fascinating opportunity to extend one of this particular church’s strongest gifts – the gift of hospitality,” Carr said.

“The ladies (Tania Getch, Sally Wells and Shelly Wells) fed them well. The trustees had no problem leaving the church open the whole night so that they could make themselves at home, use the facilities, get water, connect to the Internet, and plug in to charge their devices,” the pastor said. 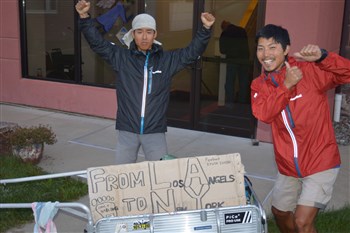 Ishibe and Yu Suzuki saved money they earned working in Hyogo, Japan, flew to LA and began the journey nearly six months ago as an adventure and a way to learn more about the U.S. and its residents. They have a Facebook page with photos of their journey.

They say they've met many nice people, but browsing the Facebook page reveals that not everyone they encountered was as hospitable as the people of First UMC. Despite producing ID and telling their story, they got an police escort out of a small Ohio town after dark one night when they tried to camp on green space near the town library.

The young men told Carr that they’ve been walking about 23 miles a day and they plan to reach New York City around Oct. 1. From there, they’ll fly home to Japan.

Carr asked about their journey and learned that they thought the desert in New Mexico and the city of Chicago were the most beautiful places they passed through.The most difficult place to walk – and kick a soccer ball?  The hills and mountains of Pennsylvania!

The most memorable character?  “Crazy Harry” who they met in Oklahoma. He had lots of Route 66 memorabilia and seemed to know everything about the highway.

They didn’t leave empty-handed. Carr gave each of them with a drink tumbler, magnet, key chain, and button pin emblazoned with the church’s new logo.