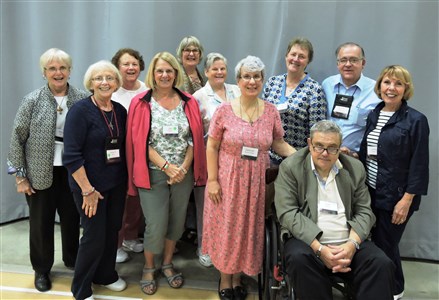 Eleven Western PA United Methodists who attended the Walking With Palestinian Christians conference at Ginghamsburg UMC in Ohio have committed themselves to working in their churches and the Conference to share the message of the untold suffering of all Arabs, including Christians in Israel and Palestine.

The two day conference, co-sponsored by the General Board of Global Ministries and the Ginghamsburg UMC, centered on education and United Methodist relations with the Palestinian Christian Community in the West Bank and Gaza.

Planning for the event began more than a year ago in the midst of peace talks, but it took on new urgency as the conflict in the Holy Land escalated in the weeks leading up to it. In welcoming the 300 participants, GBGM General Secretary Thomas Kemper dispelled the notion that organizers were taking sides in the current conflict.

“We are here to join hands with fellow Christians, Palestinians, in considering how our faith commitments can contribute to holy justice and peace for all the people of Palestine and Israel. It would be quite unthinkable for us not to meet with other Christians in this cause. And while our lens here is through that of Palestinian Christians, we remain deeply committed to working with people of all faiths—Christian, Jewish, Muslim—to achieve justice and peace in the Middle East,” he said.

“We as Methodists—we as Christians—have not always taken seriously the realities and prospects of the ancient or contemporary Christian communities in the Holy Land. We too-often have looked away as political and social pressures resulting from decades of military occupation have resulted in emigration and exile—self-selected and forced. We raised our voices, and still do so, for the formation and continuation of Israel, but we have been less forceful in noticing and addressing the conditions of Palestinians, including the Christian minorities, in the West Bank, Gaza and Israel. 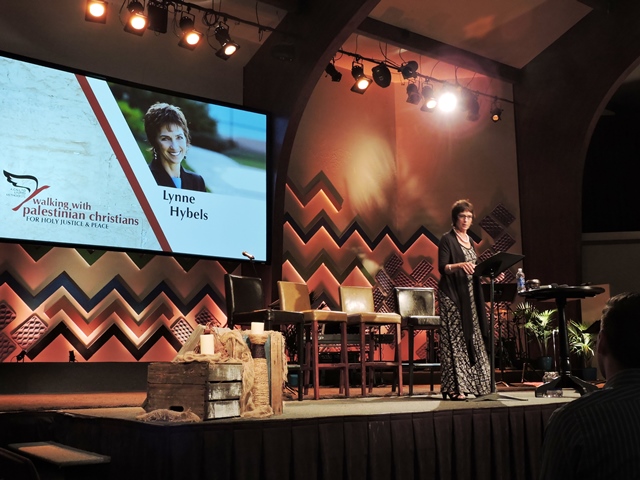 Kemper noted that the UMC and its mission agency have had missionaries in Palestine and Israel for more than 30 years.  “The ‘walk’ at Ginghamsburg is a further step in our pilgrimage to contribute to holy justice and peace in this part of the world, he said.

“Biblical study and prayer were the foundation of the presentations, along with a realistic overview of the situation on the ground in Israel and Palestine,” said the Rev. Myles Bradley, one of those attending from Western PA. “The Reverend Alex Awad, a GBGM Missionary for 25 years, brought a new interpretation to the Biblical background of the situation in Gaza, Palestine and Israel.” Download Awad’s Powerpoint Presentation.

Bishop Ivan Abrahams of the Methodist Church of South Africa, who serves as president of the World Methodist Council, reminded participants that the Old Testament calls us to pray for peace in Jerusalem (Psalm 122:6), a city sacred to three religions. Unfortunately this reverence has been shattered by the events unfolding there.

Abrahams, who said he has the blood of Jews fleeing persecution in Russia and Europe as well as the idigenious people of his continent in his veins, said we must use nonviolent means possible to restore dignity, justice and peace to all God’s children. He urged participants to review the World Methodist Council’s 2011 Resolution on Israel and Palestine, which calls for a two-state solution to end conflict in Israel/Palestine.

The conference had four areas of focus:

“Peacemaking is the cutting edge for the Church in the 21st Century,” said keynote speaker Lynne Hybels, co-founder of Willow Creek Community Church and an advocate for peace and justice in the Holy Land.

“Each person went home with new perspectives and resources to share, a new commitment to study scripture and the news, and new energy to confront the lack of awareness that results from the failure of our media to tell the whole story of the conflict,” he added.

Also attending were the Revs. Earl and Deborah Ackley-Killian, whose daughter Grace is currently serving as a GBGM mission intern with the Wi’am Palestine Conflict Resolution Center in Bethlehem. Read her prayer.

Members of the Western PA group are willing to share information learned at the event with church or community groups. For more information, email Rev. Myles Bradley.

Download Working for a Just and Lasting Peace in Israel/Palestine packet for use in local congregations.
News