Church Reaches Out with Banana Splits 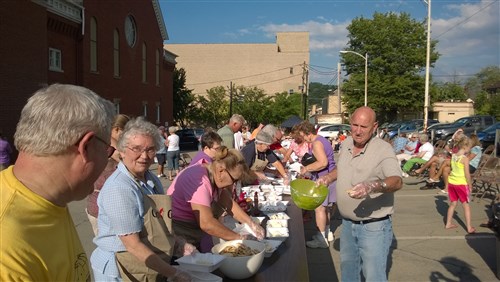 On Tuesday evening in Oil City, members of Grace UMC grabbed buckets of ice cream, bananas and toppings and set up 160-feet of banana splits to share with anyone who came by.  It was the second year for the Banana Split Extravaganza, which last year drew about 250. This year not quite as many came, but the Rev. Byron Myers said it was still well worth the effort.

“We have been doing these kinds of things for several years because we want to create events that give us a chance to meet the people in the community. We do service projects and fun events like this,” he explained.

“We realized that you can’t do a one-time thing and expect that magically things will change, but if you continue to reach out repeatedly, people would start to expect some kind of new, open-door thing at the church and look forward to it,”said Myers.

Next up is a children’s carnival in August with games, hot dogs, drinks and ice cream. There’s a dunking booth  that’s been popular with older kids, the pastor said. In September there will be a pig roast.

“Everything is free and we offer inexpensive prizes.  It’s so we get to see people and meet people in the community,” Rev. Myers said. “As we build a relationship with them, we can attract them to Christ and the church,” he added.

For example, a man and his granddaughter came for a banana split last year, said Rev. Myers. “Then they happened to be at a nearby candy store and heard the music from our Vacation Bible School and the granddaughter asked if they could come over. The grandfather stayed for awhile and we registered the little girl for VBS.  They have been coming to the church almost every week ever since.”

The church puts notices on local cable tv bulletin boards, uses signs, and often volunteers take invitations door-to-door in the neighborhoods.  Myers said they learned the importance of making contact with neighbors by accident a few years ago.

“Our youth group was doing a clean-up at city playground and pretty soon a state police car came rolling up and the trooper just sat there watching,” the pastor said. “I went over to talk to him and explain what we were doing and showed him that we had permission to do it.

“Some people who live near the park saw the kids and thought we were vandalizing playground.  We should have gone door-to-door and asked them to join us!”