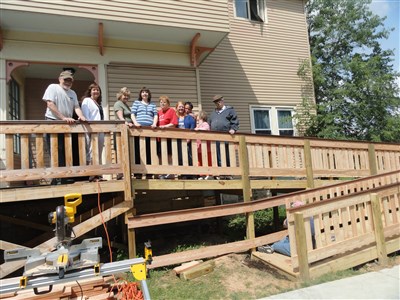 Volunteers from Warren First UMC, the Youngsville Charge, and Russell UMC in the Kane District have been working for nearly a year to build a new handicap access ramp at the Ruth M. Smith Center in Sheffield, PA.  The Center, a national mission of the United Methodist Women organization, operates a day care program for area children and a personal care home for physically or mentally challenged individuals.

Before the volunteers could start work on the new ramp, they had to bring up to code and repair two existing ramps.  The next step was redesigning and replacing the existing porch and stairs to bring them up to code and to facilitate the connection for the proposed ramp.  By that time, bad weather had set in and they had to postpone construction of the new ramp until this spring. 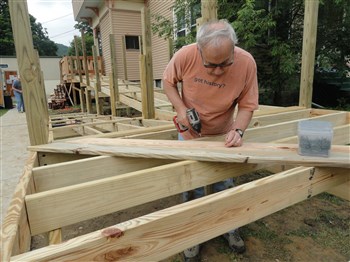 The first step this spring was to break up and remove two concrete pads that were in the way.  Because there were several unmarked gas lines under the ramp construction site, all of the post holes had to be dug by hand.  Digging was halted several times when the holes flooded, and you couldn't see what was in the bottom.  Some of the holes had to be relocated because of large rocks or other obstacles.  Fortunately, there were no "boomies",  and the posts were set and the ramp completed.

In addition to lots of labor, the people from the Russell Church donated the use of their "Hands of the Carpenter" tool trailer.  The volunteers from Warren FUMC donated most of the lumber and bought a new bench for the miter saw to make it safer and more efficient to use.

Some of the ramp volunteers had worked together on several Sandy recovery trips to New Jersey.  They are planning another Sandy recovery trip in October of 2015 and would welcome any new volunteers to come with them.  If you are interested in going, contact Richard Schall at 814-755-4908 or rschall.mschall@gmail.com.