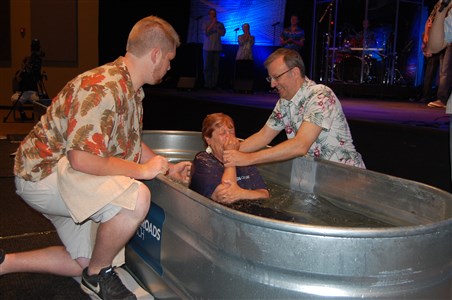 The weekend of June 27-28 was described as powerful and glorious at Crossroads Church, where they celebrated the Sacrament of Baptism and the change that accepting Christ is making in the lives of 145 people.  At the four campuses, 40 individuals were baptized for the first time and 105 others reaffirmed their baptism.

“Many people shared why they were taking that step as they were in the water, creating a flow of testimonies to God's grace and goodness,” said the Rev. Steve Cordle, the lead pastor.

The baptisms were by immersion, something new for Crossroads.

“We have never done it this way before,” said Cordle, who founded Crossroads in 1991 and serves at the North Fayette campus, where two livestock watering troughs were brought into the sanctuary for immersion baptism.  “We thought it was worth going through the considerable effort to make that work,” he explained. 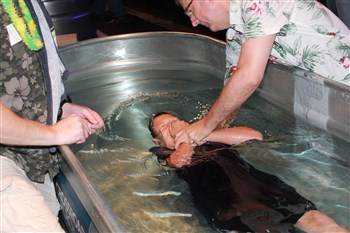 There were also baptisms at the Crossroads campuses in Bridgeville, the East Liberty section of Pittsburgh, and Weirton, West Virginia. The Cranberry Twp. campus will hold their celebration in a few weeks.

Cordle said he” became aware over the past year that, while we have had several services at which we called people very deliberately to make a commitment to follow Christ, and people raise their hands, we want to help them take the next step.  The next step is baptism.”
He and the other leaders decided to do a Baptism Celebration Weekend – and to baptize by immersion.

“Over the last few weekends, we have been sharing a bit about what we were planning and why -- the  scriptural basis.  We’ve been highlighting the fact that God has saved you through grace. Let’s be on his team,” he added.

Cordle said people responded well. Those who wanted to be baptized were encouraged to invite friends using invitations cards that were in the worship bulletins. Initially 35 people requested first-time baptism and 60 or 65 asked to reaffirm their baptism.  But during the services, additional people came forward.

Celebrations after the services had a festival atmosphere, offering pizza and games -- a sort of carnival. “We are incorporating people into the Body of Christ, so we figured we should have the body of Christ hang out together,” Cordle said.

In a sense, with the Baptism Celebration Weekend, he added, “Adults are catching up with the students here.   The students blazed the way.”

He explained that in May, Crossroads had an event called Focus in which 685 people fanned out across  Western PA offering practical help and service for widows, veterans, and others in need.  Students have a retreat as part of that, staying in homes and worshiping and working together. During the retreat about 50 of the approximately 140 youth expressed a first-time commitment to Christ and were baptized.

One student from the group shared her story on video.  She described herself as being “anti-Jesus … filled with depression,” Cordle said. “Her mom got her to go to Elevate, our student ministry.  She said she felt her heart being softened. She got baptized and she said she didn’t want to die anymore.”