Mission Fellow Called to Help Others 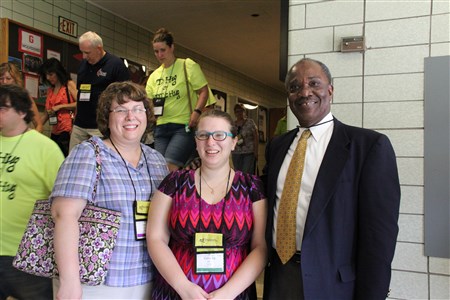 When you talk with Katy Wrona, several things become immediately apparent. This young woman is smart, energetic, and driven. Wrona is a Global Mission Fellow, currently working with Open Doors Inc. in the Mobile District of Alabama. At  23 years old, she has a maturity beyond her years and a deeply rooted passion to help others.

Wrona’s interest in mission work began as a teen after she joined the youth group at Bethel United Methodist Church in Lower Burrell. With that group she went on three mission trips where she says she never felt more herself. During her senior year of high school she participated in a mission trip to Russia  spending two weeks in Tomsk, Siberia visiting orphanages for children with disabilities to spread the joy of Jesus.

“It showed me that I had a heart for helping others,” said Wrona, who is pictured above with her mother, the Rev. Sara Wrona, and Pittsburgh District Superintendent Paul Taylor, who was her pastor at Bethel UMC and encouraged her involvement in mission work.

After graduating as valedictorian of her class at Valley High School in New Kensington, PA, she went on to receive a BA in chemistry with a minor in French from Lycoming College in Williamsport, PA. Throughout her college years she continued to look for ways to serve, including helping with local flood relief and participating in two more international mission trips.

As she was entering her senior year in college, she decided that she wanted to find a long term mission service.

“That’s what I felt God was calling me to do,” she said. “I spent a lot of time looking at my journey to that point and all those who had come into my life and touched my life.”

Wrona learned about a program for young people ages 20-30 called Generation Transformation through the General Board of Global Ministries and entered into a two-year program of service after graduation. She received training in the Philippines in July of 2014 before being placed in Alabama in August at Open Doors Incorporated where she works with the Circles of Transformation ministry in its efforts to build relationships across economic lines by helping families in poverty.

Though she often puts in longer hours than an average work week, Wrona seems to thrive on the diversity of her job, which includes going to United Methodist Women’s events, speaking at churches, co-facilitating volunteer training, leading a worship service and Bible study for children, and helping with an outreach program. She’s driven by the concept of transformation and believes God is calling her to live her faith and be there for the community that she formed in Mobile.

“One of the books that we’re looking at talks about small successes and I can see transformation happening already,” she said. “What we’re doing matters.”

By the time she finishes her two-year commitment with Generation Transformation in July 2016, Wrona will have a resume that boasts more experience than most of her peers. The exact path she will take at that point is still somewhat unclear to her, but she’s fairly confident that her future lies in ministry.

“I’m still discerning a lot,” she said. “Is God calling me into a type of ordained ministry? Is there a way that I can do a secular job and be an active member of our local congregation? I do feel like I’m being led into a life of full time ministry but I don’t feel that I know where that is yet.”

Wherever she lands, it’s clear Wrona will hit the ground running.