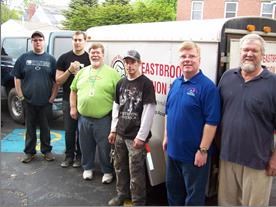 After flash flooding hit Ridgway, Pa., on March 21, Trinity UMC, which was not affected by the flooding, became the center of United Methodist disaster response efforts. Trinity's pastor provided this description of the efforts and an update on the current situation.

The evening of May 21st, as the flood waters of the Clarion River receded, Lance Tucker, pastor of First UMC in DuBois who coordinated the 2013 flood response there, arrived with a trailer full of flood buckets. That same evening he explained to me the role and importance of Emergency Response Teams (ERTs).

Rick Nelson, pastor at Youngsville First UMC, introduced me to the Red Cross personnel who came to town to assess the impact of the flood by knocking on doors in the affected areas.  When those impacted by the flood waters asked the Red Cross what to do, the Red Cross responded, "Call the Methodists."

Red Cross typically works alongside the United Methodist Disaster Relief Network, a part of UMCOR and our Volunteers in Mission program. What a blessing and what a wonderful resource our connectional brothers and sisters are, those who are trained and experienced and know what to do, and where to start.

Rev Joe Short, pastor at Emporium, arrived the next morning with a team that was ready to help.  He and his team were interviewed by Channel 6 in Johnstown and gave witness to their motivation.  They made four trips across route 120 to Ridgway with 10 team members. Rev Nelson Thayer arrived later that day with the disaster relief supply trailer from the Mission Barn.

The Saturday of Memorial Day weekend, while my wife was waiting to leave on a vacation weekend,Kane District Superintendent Tom Strandburg arrived with folks from Youngsville. The next week Calvin Cook from the Fertigs Charge,  one of our Conference Disaster Relief Coordinators, arrived to do home assessments, so that teams would be clear on what the goals were for each site, and ready to go when they arrived after coffee and prayer.

Early on, Pastor Stephanie Gottschalk, Conference VIM director, posted pictures and details of the flooding and response on the Conference website.

God has continued to provide work teams, as calls have continued to come into the church for help.  David Kissinger, Johnstown District response coordinator, has rallied three teams and driven two and half hours to Ridgway each time.

The cleanup continued after a break for annual conference. Pastor Cindy Gray and Erie-Meadville District director Rick Gilson arrived with a team; someone willing to pitch in came from Leechburg;  a team from Grove City appeared, and a group from Charter Oak in Greensburg brought together by Rev. Donna Gabler and Jonathan Hartland.

At this point it has been three weeks since the flood.   Thirty requests have come in with a variety of needs for help with cleanup; including several members of our church, and 60 people have come offering roughly 300 “man “ hours of assistance.

Volunteers have worn rubber gloves, rubber boots and face masks for protection from black mold and contaminated debris, supplies available through the Conference Mission Barn supply trailer.  They have hauled debris to the curb, ripped out soggy carpet and saturated insulation, opened drywall to allow for the walls to dry out, taken up warped sub-floor boards , and more.

The people of Ridgway truly appreciate the efforts of United Methodists who came alongside to help, in the name of Christ, and for those churches who prepared flood buckets, sharing the love of Christ as an encouragement to people whose lives have been “turned upside down”.

We at Trinity Church are grateful that our church building and parsonage were not affected by the flooding, which made it easier for us to respond with hospitality to volunteers and in organized ways to manage the response.