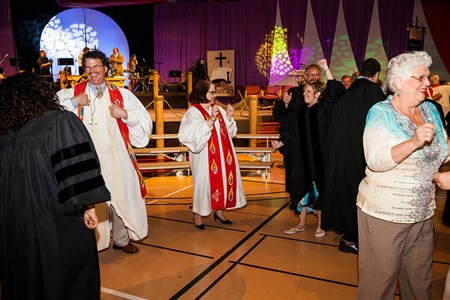 Against the backdrop of fishing nets and a dock, Bishop Thomas J. Bickerton and other speakers at the Western PA Annual Conference emphasized the need to be Drawn Deeper beneath surface issues and beyond ourselves to seek and follow God’s will in our lives.

In the opening worship, Bishop Bickerton used the story from John 4 of the Samaritan woman at the well to illustrate how Jesus reached out in love across traditional boundaries regardless of the cultural rules. Followers of Christ are called to do the same, he said, and must go deeper to find ways to do that.

The Bishop struck a sobering note in his State of the Church address when, in listing a series of challenges faced over the past year, he pointed to a rise in patterns of racist, sexist and discriminatory behavior in some congregations. Those exhibiting these behaviors are voicing their own opinions, "but that voice is not the voice of Jesus," the Bishop said.

“Everyone is welcome in the fellowship of our church,” he added, “but these voices of racism and sexism are not welcome and must be confessed and transformed if we are to find our true voice of witness and ministry in this Annual Conference."

As the church faces difficult and divisive issues, its people are called to reflect God’s love and speak with the voice of Jesus, Bishop Bickerton said. “We have to draw deep into the well of God’s grace and draw deep into the heart of God.  The future of the church will depend not upon our humanly driven ideas...

“Can we all find a way to lay down our human agendas and opinions, no matter how convinced we are that they are right, and genuinely … open ourselves to what God would have us do and be?” he asked. “It is time for us to demonstrate to the world that different people who think differently can find ways to love one another in spite of our differences.”

In an attempt to do this, during a lunchtime session, the Bishop focused on Same Gender Ceremonies and Church Law, explaining differences in various sections of The Book of Discipline and the circumstances surrounding resolution of complaints filed against some clergy for officiating at same-sex unions.  He said the session would be the first in a series of discussions around Western PA aimed at determining how we can “preserve the unity of the church and be fully inclusive in the midst of our diversity?”

At the Laity Academy before the official start of the annual conference, Frank Schaefer, the Eastern PA pastor who was defrocked after officiating at the same sex marriage of his son, told his story in classes presented by the Reconciling Ministries Network. He was joined by Pittsburgh Theological Seminary Professor Steve Tuell, who described Biblical stories in which those who “broke the rules”, including Jesus, were favored by God.

As Bible Study leader at the annual conference, Dr. Joy Moore, an associate dean and assistant professor of preaching at Fuller Theological Seminary, emphasized the need to learn and tell the stories of the Bible, rather than using Google to find words that match our own ideas. In a session entitled Working with Words in a Visual Age, she said, “It is easy to pass through the Bible and weave together a scriptural witness to our preconceived notions.”  By not telling the sacred stories, we undermine the truth, she added.

Guest Preacher for the Conference was Bishop James King Jr. of the North Georgia Conference. He focused on the book of Acts, where God flows through Christ’s followers. Noting that every day presents a new opportunity to be more Christlike, he said people today are looking for a church that will bless them and meet their needs, rather than looking for a church where they can be a blessing. “Our way of blocking God is by focusing on ourselves,” he said. “In caring for ourselves beyond all measure, we block God.”  He urged members to let God flow through them.

At the commissioning service for new provisional elders, he emphasized the need to keep moving. “There is no place to pull over and park and say God is through with me now,” he said.  He also offered 8 Holy Habits to Keep Us Close to the Holy Spirit: Prayer, studying scripture, worship, hanging out with Christian friends, family time, moderate exercise, a healthy diet and taking a vacation moment.

While the Conference opened with Bishop Bickerton stressing the importance of loving one another despite differences and heard about serious issues facing the church, it ended on a high, joyful note.

During the Sunday morning ordination service the Bishop said leaders need to bring joy back into our churches. Calling himself the official DJ for his Cabinet, he demonstrated by showing a video of Pharell Williams’ Oscar -nominated hit “Happy” and encouraged everyone to get on their feet and dance to the catchy tune. The joy was contagious.

Conference members packed 44,670 meals for Stop Hunger Now and filled a truck with an estimated 30,500 pairs of old shoes to aid the Erie United Methodist Alliance’s homeless ministries and All God’s Children/Ramps to Hope ministries to those with disabilities. The shoes bring funds for the missions  based on a per pound rate from Funds2Org. The shoes are kept out of landfills and and Funds2Org delivers them to micro-enterprise ventures in developing nations.

The Golden Sneaker Award for miles logged in walking programs with a spiritual dimension (or alternative activity), was presented to the Washington District. Erie-Meadville earned the Silver Water Bottle Award and the Indiana District received the Bronze Award for third place. This was the last year for the Golden Sneaker Awards.

During a youth presentation, the Pineapple Award for support of the Youth Ministry Team activities was presented to Sandra Matoushaya, Zimbabwe Partnership Coordinator. The Timothy Award for a student who models the characteristics of 1 Timothy 4:11-12 went to Kevin Jenkins of Chippewa UMC.

Patti Columbe, CEO, and Deryl Larsen,secretary,of the Keystone United Methodist Federal Credit Union board, presented a check for $4,000 to Bishop Bickerton to assist in the Conference’s ongoing ministry. That brings the total amount given by KUMFCU to assist with new church starts to $63,000.

Members also approved legislation:
Several pieces of legislation were not approved, including: In other Conference business, Larry Bridge was elected as the new Conference Treasurer.

A total of 1501 individuals, including members, vendors and visitors, attended the conference session.

To see photos, video and the Daily Journal, go to AC2014/news
News