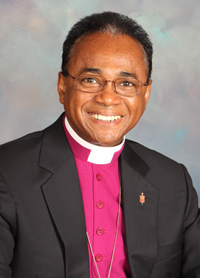 Bishop King was nurtured in faith at his hometown church, Pleasant Grove UMC in Ashland, Alabama. After answering God’s call to ministry, he received a Bachelor of Arts degree at Clark College and a Master of Divinity at the Interdenominational Theological Center in 1972. Both are in Atlanta, Ga.

During his tenure in the Tennessee Conference he also served as a District Superintendent and Conference Council Director. He has served as a delegate to Jurisdictional and General Conferences from 1988 through 2000, and was elected to the episcopacy in 2000.

Bishop King served as bishop of the Louisville area – which includes the Kentucky and Red Bird Missionary Conferences – for 8 years before being assigned to South Georgia in September 2008. He was reassigned to the South Georgia area in 2012.

Bishop King previously served as the president of the General Commission on United Methodist Men and co-authored 366 Meditations for Men. He published his first book, CLU-Christlike Love Unit, in August of 2013.

He and his wife, Rose, now reside in Macon, Ga. and have two sons and one daughter plus two grandchildren.