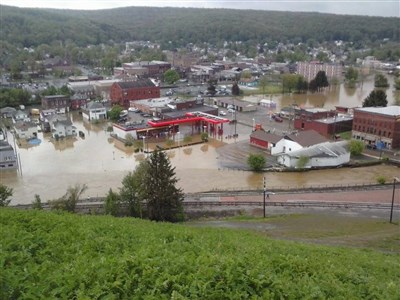 Conference Disaster Response coordinators have issued a call for volunteer teams to help muck out, sanitize and and do "triage repair" on about 20 homes in the Ridgway area that were affected by flash flooding last Wednesday, May 21.

The Red Cross in the area has been working with homes where utilities have been affected and referred others to Trinity UMC in Ridgway for assessment to determine what response is needed, according to the Conference Disaster Response coordinators, the Revs. Calvin Cook and Rick Nelson.

Initial Early Response Teams have done assessments in close to 35 locations and were winding down the assessments this week. They estimate 20 houses in need of cleaning out so that situations of black mold and further decay can be avoided. Approximately half of the people affected had flood insurance and are working with their insurance companies, while the other 50 percent are on their own to recover. Many of these households are at-risk families and individuals.

To schedule a team, contact Trinity UMC in Ridgway at 814-772-5212.  Roger Peterson, pastor of Trinity UMC in Ridgway, space is available for those who want to come and bring a sleeping back or air mattress for two or three-day efforts. The church will assist with the teams needs as much as they can. One-day teams have also been very effective working 9 a.m. - 3 p.m.

Individuals volunteers who are not part of a team may call and be put on a list to paired with others.

Ridgeway and other areas of Elk County were hard hit by a series of thunderstorms that quickly dropped an estimated four to five inches of rain the morning of May 21. Several businesses, including an auto parts store and the Veterans of Foreign Wars post in Ridgway were damaged.

A Catholic grade school and a senior citizens' high-rise in Ridgway were evacuated, as was a grade school in Huston Township. More than 75 people went to shelters, including the Ridgway fire hall. Emergency crews used boats to reach some people trapped by the floodwaters.

Standing water as high five feet was reported in several areas after the storms passed through. By Friday most of it had receded, leaving mud and debris in its wake.