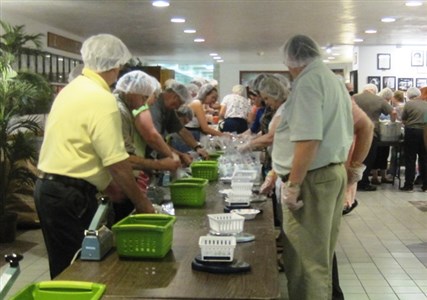 In downtime during the 2014 Western PA Annual Conference packed 44,670 meals for Stop Hunger Now, nearly 20,000 more than during the 2013 annual conference session.

Every day, an estimated 25,000 people across the world die from hunger and related illnesses. To address the situation in a hands-on way, our Conference partnered with Stop Hunger Now, the international relief organization that coordinates the distribution of food and other lifesaving aid to countries in need around the world.

“The meal-packaging was an opportunity for the people of The United Methodist Church to help out the hungry around the world," said the Rev. Barb Moore, chair of the Conference Sessions Team who arranged the effort. "It is one of the most successful mission projects I have seen happen at Annual Conference."

To help fund the meals that were packed at the 2014 annual conference, the Sessions Team encouraged congregations who are not involved with meal-packing events in their area to donate to the effort. One church handed Moore a check for $300. An offering was received at the Conference, but the total amount raised was not yet available.

The meals, a combination of rice, soy, dehydrated vegetables and flavoring mix with 21 vitamins and minerals, are put together in an assembly line, sealed in bags, weighed, then packed in cartons for shipping. The food is reconstituted with water and can be supplemented with flavorings used in the country receiving them.

They are distributed in schools and orphanages in developing countries -- and elsewhere in crisis situations. Each meal costs 25 cents.  It sometimes may be the only meal a child or adult receives in a day.

Most of the meals are distributed through schools "because we can get children into school for the food and education will help them get food for the future," said a Stop Hunger Now representative.

According to the World Food Program, in 2012 there were 66 million primary school-age children who attend classes hungry across the developing world, with 23 million in Africa alone.  In addition, there are 67 million school-age children who do not attend school, in many cases because parents in poor households must choose between sending their children to school or to work the fields.

In addition to producing the 25,000 meal packages, which were sent to children served by Kids Alive International in Zambia, the 2013 Annual Conference packaging effort inspired some volunteers to launch meal-packaging events in their churches.

At the 2013 Conference session, many of the 1800 members started packaging on Thursday, June 13.  As of 2 p.m. the next day, the goal of 25,000 meals was reached and many wanted to do more. However, it wasn’t possible to get additional ingredients on short notice, so the goal was increased for 2014.  View slideshow from 2013 Annual Conference meal packaging.