Bishop Thomas J. Bickerton has announced that the Rev. Amy Wagner, pastor of Coraopolis United Methodist Church, will be appointed to the Conference staff as Director of Congregational Development, effective July 1.  She’ll step into the post currently held by the Rev. Jim Walker, who will move to Oakland, CA to serve an urban congregation.

“We are very excited about Amy Wagner’s appointment to the Congregational Development office.  Amy brings a passionate desire to see congregations thrive in context and shares a long-term vision for starting new congregations throughout Western Pennsylvania.  Her experience in a conference office as well as the local church brings new and fresh ideas to our building and to our work,” said the Rev. Greg Cox, director of connectional ministries.

“Along with the the entire connectional minsitres staff, we are excited about starting conversations about what it means to be a vital congregation throughout the connection.”

Prior to her appointment at Coraopolis UMC, Wagner served as Congregational Development Coordinator for the Northern Illinois Conference. Her duties there included doing church assessments, leading training workshops, communicating the congregational development goals to local churches, and providing administrative support for new church starts.  She was involved with the NIC Congregational Development Institute, through which church leaders were brought together to learn from experts, share best practices, and support each other.

“The Institute brought clergy together and brought in speakers and gave them examples what could be done; it got them praying together and reading the same books,” she explained.  “Some of the most successful church starts were incubated there.”

During that time, Northern Illinois launched its Harvest 2020 campaign to start 100 new faith communities by 2020.  Wagner was part of the team that worked with Bishop Hee Soo Jung to do strategic planning around new church starts.  Also during that time, Chicago hosted the 2009 School of Congregational Development and Wagner was able to network with speakers and experts in the field.

In Coraopolis, Wagner’s congregation is working to develop Faith Acts, a new community of faith in neighboring Moon Township centered on small groups and hands-on service.   “It came out of a year of talking together and thinking about what it was like to be contextual,” Wagner explained.

According to its webpage, “FAITH ACTS is also committed to families growing in faith together. Children and youth are welcome and integral parts of our community. Young people today want to engage in meaningful action, and FAITH ACTS encourages such engagement as a path toward growth in maturity and faith.”

Amy and her husband Rob Wagner, a patent attorney and corporate litigator, have two children, ages 4 and 6. She is a 2000 graduate of Grove City College and Asbury Theological Seminary and earned a  Master of Arts in Theology & Ethics from Loyola University Chicago (2012).

She currently serves as co-chair for candidacy and recruitment on the Conference Board of Ordained Ministry and will continue in that role when she begins her new appointment.

In the new post, Wagner said, she expects to build on the many conversations started by Walker over the past few years. 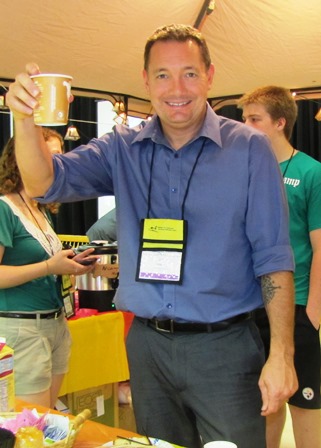 “I see a lot of what I am going to be doing at first as listening,” Wagner said. “I will be networking, building bridges between people and community needs and offering resources.”

Walker too emphasized the importance of building bridges when he was appointed to the then new position of Director of Congregational Development in October 2011. One of the two founding pastors of the Hot Metal Bridge Faith Community on Pittsburgh’s South Side, he had served there nine years and  said it was time for him pay it forward and help others create new places for new people.

It’s important to focus on how we as a church can all be bridge-building, he said. “We don’t have to create cookie-cutter bridges. Not all bridges are alike. The bridges might not look the same, but the job is the same – finding ways to connect people to God.”

Sometimes a new group within a church can be the connection, sometimes an outreach ministry that connects the church to the poor or the poor to the church, he explained.

Walker said that while he welcomed the opportunity to work in congregational development here, he and his wife Brenda, pastor of West View UMC, will become empty-nesters this summer when the second of their two children enters college and they feel called to explore new areas of ministry.  Brenda will begin an interim appointment with a predominately Chinese congregation not far from where Jim will serve in Oakland, CA.

“We are going to miss Jim Walker,” Cox said. “He brought a spark of creativity to our staff and has caused us to think differently about our work and those whom we reach for the Kingdom of God.”