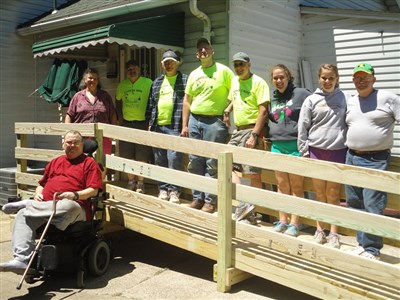 About 65 people from 20 churches worked together to build ramps to provide accessibility for residents of five homes in the Erie-Meadville District on Saturday, June 8.  It was the third annual Blitz Build for Ramps of Hope ministries in partnership with the District. See photo album

Rev. Debbie Hills, founder and executive director of the Ramps of Hope Ministry, said the volunteers were amazing, "working in the power of the Holy Spirit with true love and joy that can only be found through our amazing and wonderful God, Lord, and Savior. Words are not enough to express my thanks for their support and hard work to make this possible. The families we served were so blessed by not only their hard work, but also by their presence and the love and care they freely gave," she added.

Planning for the Blitz Build began early this year. After dates were set, there were site evaluations, intake procedures with potential recipients, and preliminary plans for possible building sites. "Ramp plans had to be developed, building and zoning permits secured, and lumber and other supplies ordered," Hills explained.  "Faithful supporters promoted it in their churches and gathered willing servants. Donations were given by several churches to help with the cost of the needed lumber and hardware."

The Wednesday evening before the build, a few volunteers gather at "Ed's Place, the facility near West Springfield UMC where ramp modules are built and stored for staging. On  Friday evening, about 40 volunteers gathered and, in a few short hours, built all the needed modules, loaded the trailers for the morning build, and shared food prepared by volunteers from some of the churches.

On Saturday morning, four teams were on site and working by 9 a.m. to install 5 ramps. Food was prepared and brought to each site by  more willing servants and the work teams shared meals with ramp recipients. Ramps were completed; pictures taken; and prayers offered to bless the ramps and our recipients.

One of the sites was particularly challenging, with extreme space limitations, Hills said. "But with everyone pitching in, the job got done.

"It was an amazing time of serving our God and our neighbors, for sure," said Hills. 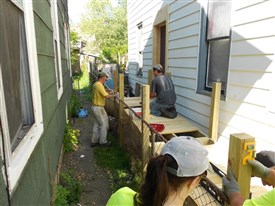 Ramps of Hope, which Hills started in out of the West Springfield UMC, has five team leaders and regular volunteers from several churches who  construct the modules and ramps, and others who provide food for the volunteers.  They build an average of about four ramps each month in all kinds of weather.

They provide recipients with far more than a ramp, Hill explains. "Our servants are able to be the hands and feet and face of Jesus to some folks who need to know that they are not alone and forgotten – that Jesus loves them, and so do we! We have been positioned to love them unconditionally, to offer prayer and pastoral care as well as other acts of caring as their needs present themselves and resources allow."

Ramp ministries are also carried out by United Methodists in other areas of Western PA, including the in Somerset and Johnstown areas and in the Washington District, where Ramps of Grace leaders were mentored by Hills.  Ramp modules are also built and stored throughout the year at the Eastbrook Mission Barn.