Residents of the Connellsville area in southwestern Pennsylvania showed that a community effort CAN  go a long way toward easing hunger in an area where many are living in poverty.

Create to Donate, an interactive community competition, encouraged and rewarded support of the food pantry at Connellsville Area Community Ministries (CACM), a regional mission agency of the Western PA Conference.

Businesses and organizations in the community were invited to create sculptures using cans and other non-perishable food items.  Area residents were encouraged to vote for their favorites– as many times as they want between April 20 and May 2--  by putting a can or food item in a box at the sculpture location or at CACM’s storefront in the downtown area.  The sculpture that receives the most cans/food items wins.

“I estimate that we will receive around 2,500 food items through this campaign,” said Chip Rowan, executive director of CACM. “Many of the sculptures have over 300 cans per sculpture. We plan to share the food with a few other food pantries in the Connellsville area.”

The CACM food pantry serves about 350 families in the spring and summer months,  Rowan said.  Food used in the the sculptures and collected through voting will help those clients and be shared with the pantries at Leisenring, Vanderbilt and Bullskin. 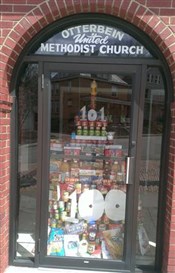 The sculptures included Help is on the Way, a train created at Central Fellowship Church; a chicken at Domino's Pizza; God and Country at Geibel Catholic Junior-Senior High School; Pac-Can at Ghost's Floor Store, a DQ logo 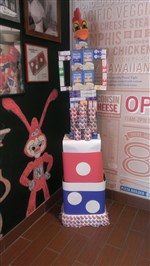 at Lynn's Dairy Queen; a 100th Birthday Cake by Boy Scout Troop 101 and Venture Crew at Otterbein UM Church and a buy local logo the Greater Connellsville Chamber of Commerce. Dominos reportedly offered incentives in exchange for  "votes" for the chicken, free cinnastix for four cans, a small pepperoni pizza for six.

UPDATE: Rowan's estimate of the number of cans received was a bit low. When voting closed and the sculptures disassembled, 4,073 cans and other non-perishable food items were collected  for the CACM food pantry. The bounty was shared with pantries in Bullskin, Vanderbilt and Dunbar Township, and food collected at Geibel Catholic school will be used at the St. Vincent dePaul food pantry.

Top prize winner was Central Fellowship Church's  "Help is on the Way” train sculpture with 865 votes. The creators  received $250.  Dominos Pizza received a total of 561 votes and won $100.  Third Prize of $50 was awarded to Ghost’s Floor Store who garnered 340 votes with the “Pac-Can” design and fourth prize went to the students at Geibel. Their "God Bless America” sculpture received 282 votes.

A full-page ad in the local section of the Tribune-Review newspaper on Sunday, April 26 included photos of each sculpture and voting instructions.

Three students from Penn State University’s Fayette Campus helped CACM staff and volunteers get the campaign running. Campaign coordinator Andrea Swan told the local newspaper that they are thrilled with the number of participants and the response of the community.