Add to my calendar

The Conference United Methodist Men and Butler First UMC are sponsoring an All-In Men’s dinner and program  with former Pittsburgh Pirate Manager Clint Hurdle from 6-8:30 p.m. on Thursday, November 7 at the Crossfire Campus of Butler First UMC (Intersection of Route 8 North & Mercer Rd., Butler, PA ).  The event is open to all men and boys.

Cost is $20 per person and includes a meal.  Event proceeds benefit the ministry of Christian Sports International (C.S.I.), a Zelienople-based ministry that uses sports camps & clinics to talk to kids about Jesus Christ. 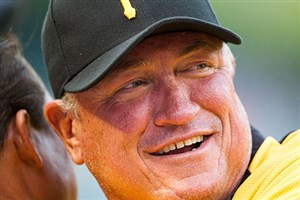 About Clint Hurdle
At the age of 20, Clint Hurdle appeared on the cover of Sports Illustrated and and was acclaimed as professional baseball’s next ‘phenom’. In a 10-year career that has been described as "utterly modest", he played for the Kansas City Royals, Cincinnati Reds, New York Mets and St. Louis Cardinals.

Hurdle was named manager of the Colorado Rockies in 2002 and led the team to its first World Series appearance in 2007. They lost to the Boston Red Sox. Hurdle was fired by the Rockies during the 2009 season.  and hired by the Pittsburgh Pirates in November, 2010, he led the team out of a slump to three straight post-season appearances. He was named the National League Manager of the Year in 2013, but in recent years, the team recorded losing seasons.  Shortly before the close of the 2019 season, Hurdle, 62, was fired. Overall, under Hurdle's leadership, the Pirates record was 735-720-1. He now says, "God's got me right where he wants me."

A recovering alcoholic, Hurdle had two failed marriages, but he has been redeemed by Jesus and been married for 20 years to his wife Karla.