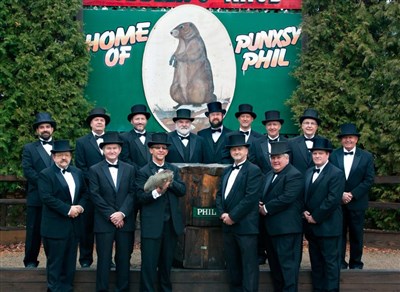 I love Groundhog Day.  I don’t know why.  It’s probably that it speaks to an inner childlike, silly nature.  In fact, this year I declared that since we were back in PA we needed to watch the ceremony on TV and “celebrate.”  (I’m not sure my husband knew what to do with that.)

Sure, we can say it may be tradition.  I don’t really know.  I tried to look it up.  All I’ve learned so far is they are “local dignitaries.”  And even the retired ones seemed to be white and male.  And we can probably say that Punxsutawney may be less diverse than some other areas.  But then there are reasons for that too.

The thing is, I’m not trying to pick on the individuals who are part of the Groundhog Club's Inner Circle, though some will choose to read this that way.  I’m trying to say, I noticed.  And maybe someone else did too.  And maybe we should.

Raising questions and trying to understand images like this and like others we see in the media need to be part of our ongoing conversation.  This isn’t an isolated story.  I can easily call to mind a series of local college commercials that have been airing recently that have a cast of characters that really all look the same, save their age.

The question is:  What do these images tell the people who see them when they aren’t a white male, or any other given picture?  Does it open possibility, or does it close doors?

You know, I have become convinced that I never considered the possibility of pursuing a call to be a pastor until I was exposed to the image of a female pastor at my home church.  I’m sure I’ve downplayed that over the years, but really the question could be asked would I even be sitting here and writing this without that image offered to me.

We have to ask these questions.  We have to be aware of the message that media, images, and groups convey.  Diversity is an issue that has to be confronted.  Pay attention.  What do you see?  How might your simple observations help move the conversation forward?