As I watch my grandsons learn something about lining up for a football play, I see them perfecting the all-important three-point stance: both feet planted firmly on the ground, one hand on the ground, and one hand up and cocked back toward the hip or thigh.  The stance allows for a faster start by linemen and running backs.  It’s a pretty easy “learn.” 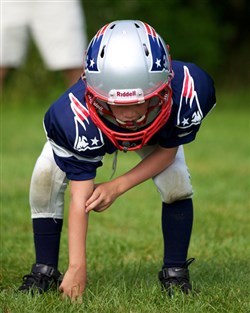 As I grow older, I have learned something important about my own three point stance: don’t try to bend down to pick up something on the floor without grabbing on to any available support with one hand! Aging has its own three-point stance.  Fail to learn it at your own peril.  I have experience!

People of “The Way” of Jesus have a three-point stance as well. We call it the Trinity.  Not as clear! Not as describable! But a stance nonetheless.

The doctrine of the Trinity was established by early church leaders to attempt to “explain” at least three ways in which we know God.  Over time, the Trinity became fundamental doctrine for all believers.  But it also remains fundamental mystery.

I believe in a creator God as the ground of all being, as “being” itself. (Acts 17:28)  I believe in Jesus as the one person who shows us more of God than anyone else who has ever lived as one who was attuned to God with all of his being. (Colossians 1:15a) And I believe that the spirit of God is within us and around us to guide us toward Kingdom living. God has breathed into us of God’s own spirit. (Genesis 2:7)  But this Trinitarian experience of God retains a certain incomprehensibility.

Fr. Richard Rohr writes, “There are some things that can only be known experientially, and each generation must learn them for themselves….God is not only stranger than we think, but stranger than the logical mind can think. Perhaps much of the weakness of the first two thousand years of reflection on the Trinity…is that we’ve tried to do it with a logical mind instead of with prayer.”

I was asked one time by a couple who thought to challenge me, “So, do you believe in the Holy Trinity? Or not?”  My only answer: “I believe deeply in what it means.”

I have tried to “explain” the Trinity—once, in a sermon, many years ago.  Never since that time. Not again in 43 years of ministry. Not even on what is called “Trinity Sunday.”  Rather, I continue to celebrate a God made known to us in varied and powerful ways.  Because we are human, we have limited capacity to understand or explain.  But because God is a gracious God, we are offered a variety of venues through which to experience the Divine around us and in our midst.

I invite you to lead from that perspective.