Report from the Mission Field: Florida 2018 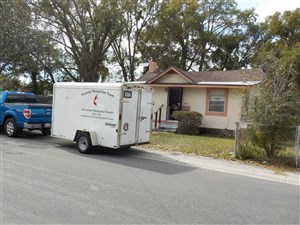 It was an honor and blessing for me to lead a VIM team from Western Pennsylvania to Tampa, Florida last week. We had eight team members, two from the Johnstown District, one from the Greensburg District, three from Erie-Meadville and two non-United Methodist guests.  Team members ranged from age 85 to 20. We were a very diverse team, but as always God pulled us together and we got a lot of work done during our five days there.

We met at the Conference Center on Saturday, Feb. 3 and drove to Columbia, South 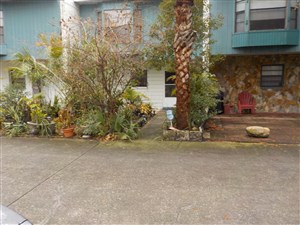 Carolina where we stayed in a parsonage that is used to house work teams.  We drove to Seminole, Florida on Sunday and were hosted by the Aldersgate UMC, Jill Hockin was our Florida Recovery Host.  Aldersgate was very gracious to us and we were the first team that they have hosted.  They opened up to us and invited us to join them on Wednesday evening for their weekly youth and small group dinner.

On Monday we met with Rich Lubanski our construction manager and started work on the first house.  There is an addition on the back of the house with a flat roof that was first damaged in 2016 by Hurricane Hermine and then suffered additional damage in 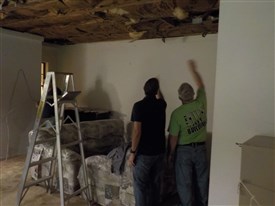 Hurricane Irma last year.  The flat roof has been replaced and we were to replace the ceiling.  There was damage to the trusses (roof and ceiling supports) that had to be repaired before we installed new drywall.  After all of the drywall was installed, the team installed the joint compound, sanded and installed new light fixtures.  There was some frustration and disappointment because we could not paint and move the furniture back into the room, but there was just not enough time to do the final steps.  We worked at this house all five days with some of the team.

On Wednesday we split the team and started on a second home that also was damaged by both of the hurricanes. The homeowner has been in temporary housing since September because his roof was severely damaged.  The new roof was installed 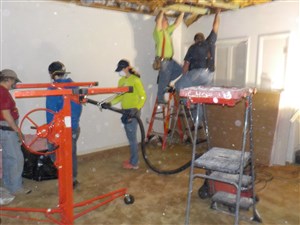 and our job was to repair the ceiling in the kitchen, laundry room and the bathroom.  The floor support system was rotted and the bathroom floor would not support a toilet, and without a working toilet he could not move in.  He was to lose  his temporary housing Sunday, Feb. 11.  We braced the floor and installed new wood so that a new toilet could be installed.  When we left this house on Friday, the toilet was installed and working; the inspector was to come on Saturday so that the homeowner could move in on Sunday.

Overall, we had a great week of service to our Lord and Savior.  There were many spiritual gifts shared and taught to others as we worked on these houses.  We travelled in two trucks. Weather was not always our friend: We started out with snow and ice, clear and then into rain.  We had morning fog in Florida for the work days, with highs in the upper 70s and low 80s.  The return trip was clear, then into fog, clear and then into rain and more fog.  Everyone got home on Saturday night so that we could worship in our home churches on Sunday.