Mission Ambassadors Sandy McKee and Lynn Sibley recently returned a visit to Belfast, Northern Ireland. Here's the second of two reports. Lynn and Sandy will teach the mission study at WPAUMC's 2019 Mission u at California University of PA in July.

“The goal of our mission is to shine a light into people’s darkness,” said Brian Anderson, a Methodist minister and superintendent of the East Belfast Mission.  He says that along with reaching out to those in need, the mission works to bring Protestants and Catholics together in a loving and safe environment. 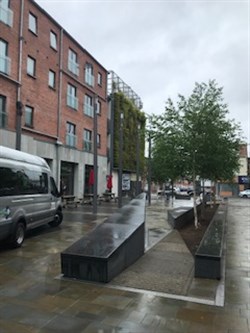 Friction between the Unionists and Nationalists comes up constantly in conversations with cab drivers, tour operators and people on the street as well as in the congregations.  The high walls and gates that still exist between some Protestant and Catholic neighborhoods along with the countless murals expressing divergent viewpoints attest to the conflict and tension that lie just below the surface in Belfast.

We were welcomed into the homes of people who work at the mission for meals or tea and also were invited to preach at the regular Sunday Service at EBM.  Many came up to us after the service to express their love of the United States and share their stories.  One man shared how the UM Board of Global Missions had made it possible for him to study Conflict Resolution in the U.S. at Virginia’s James Madison University.  He is working in the field of Conflict Resolution today in Belfast.

We spent an afternoon with the women of Knock Methodist Church, nibbling on scones and painting pottery.  We discussed the many projects their women’s groups are involved in and we felt like we were with a group of our own United Methodist Women.  As the day went on, many of the women spoke of what their lives were like during the “Troubles” (the years of violence) and how it continues to impact their lives.

We spent an evening hearing about mission work in Uganda from a very dedicated woman who has led the effort to find housing, job training and care for young, pregnant Ugandan girls.  They are often the victims of rape and as such, have been discarded by society. Some are as young as 11 years old and they have no one else to help them.

While most of our time in Belfast was at the mission, we did do some sightseeing.  A city tour helped us comprehend the tensions over the years between the Irish, Scots and English and other ancient tribes.  A trip up the northern coast, despite the wind and rain, took us through spectacularly beautiful scenery.  We saw ancient castles, patchwork fields in shades of green bordered by hedgerows of stone walls and white flowering Hawthorn bushes, ocean vistas and the amazing Giant’s Causeway, a world heritage site.  We saw hundreds of sheep grazing on the green rolling hills.  Our tour guide said that they don’t really know how many sheep there are in Northern Ireland.  “Every time people try to count the sheep, they fall asleep.”  The Irish wit and humor was constant, and despite the challenges, laughter permeates most conversations. 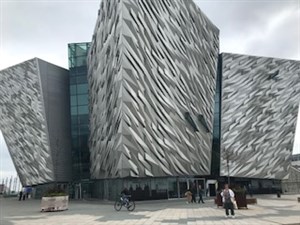 You may remember that Belfast was also the site where the Titanic was built and we found time to visit the impressive Titanic Museum and Experience there.  It’s said to be the most visited tourist attraction in Europe.  It reminds us that no matter how big or grand things made by man are, they can fail.  Only God is unfailing and perfect.

The EBM (East Belfast Mission) is one of the most comprehensive urban missions either of us has experienced.  It does so much for so many and is free to anyone who needs help.  Like most missions, it constantly faces financial challenges.  Please consider them in your prayers and maybe even make a contribution to the good work being done there.