I was not yet born when John Robert Lewis made his first march across the Edmund Pettus Bridge in 1965, but the last time he crossed that bridge, on July 26, 2020, led me to tears. When he first marched across that bridge, named for a Confederate officer who was also a leader in the KKK, John Lewis could only dream about a black man having as much power and influence as he had in the US Congress. In 1965, African American, Latinex, and Native Americans were not even guaranteed the right to vote. Today we have had a black president, several black women serve as mayor in prominent US cities, and there are respected African Americans in the US House and Senate. I wonder if John Lewis dreamed of this as he marched across that bridge for the first time. 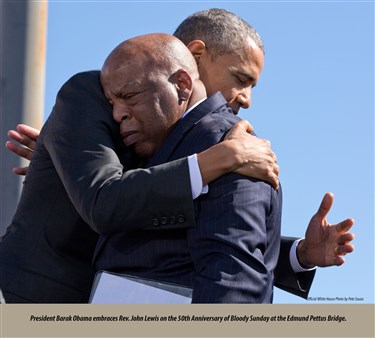 As I watched the caisson carrying Rep. Lewis pause at the top of the bridge, my tears were tears of joy because there were Alabama State Troopers at the foot of the bridge, this time ready to welcome John Lewis, rather than beat him.  We have come a mighty long way.  My tears were also tears of lament because we have so far to go to ensure the equality of all people in this great country in which we live. My tears were tears of conviction for not always using the economic and social privilege I have enjoyed as the daughter of two college graduates in order to stir up “good trouble." My tears are tears of regret that there were times when I saw something, but did not say something, much less do something.

It is a blessing to serve in a place where not everyone who reads these musings will have always agreed with Congressman Lewis’ politics.  (I love diversity).  But I hope that we can all agree that we have all benefited from having a man of integrity and deep Christian faith serving our country.  Congressman Lewis was a champion of marginalized people and he will be greatly missed by Democrats and Republicans alike.

In honor of John Robert Lewis’ legacy, I give you all permission to get into some “good trouble” as you work toward equality for all.  If you see something, say something, and most importantly do something.  Some would say this is the example that Jesus gave to us. Go and do likewise!