“Creating opportunities for better lives through Christ-centered service” is the mission of Henderson Settlement. Mission Ambassadors Sandy McKee and Lynn Sibley share some additional experiences from their week there

On Tuesday we volunteered to assist in the food pantry that’s open three days a week. Two local women who volunteer there on a regular basis showed us the ropes of bookkeeping, food distribution and neighborly kindness and hospitality. We’d been 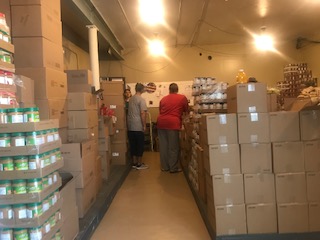 told that there is much food insecurity in the region and were impressed with the volume and variety of supplies available. Most people were greeted with a hug or conversation about how family was doing. As they wandered through the open boxes, the attitudes were of respect and gratitude. Some people seemed lonesome and lingered to share their stories. Many were taking care of family or friends with serious health problems.

As the day went on, we drew quickly closer to the other two volunteers.

One lady spoke of her 39-year-old son who was still living with her. It eventually came out that he suffered serious heart, kidney and liver failure problems due to drug addiction. Drugs and alcohol pose as great a challenge in isolated rural America as in the mainstream. The mother clearly loved this son but didn’t try to defend him. “He’s made some bad choices that he has to live with.”

The other spoke of her five year battle with leukemia and trying to care for an autistic nonverbal twelve year old son.

We shared our stories too, and we all agreed that our greatest solace was our loving and merciful Lord.

After a great dinner, we settled into some serious Uno card playing. We ended up talking more than playing. We shared humorous stories from previous mission trips along with insights into our home Methodist churches. We wondered what was to become of our divided yet beloved denomination.

One thing that did seem certain is that the spirit of mission that flowed through the blood of UMW founders 150 years ago is still alive and well with Methodist Women today.

On Wednesday we spent part of the morning sorting donated new and used infant wear by season, gender and size. One of our new friends was staying for a month to work on this. She comes every year at this time. Marilyn says it’s a never ending job. “Just when you think you’re caught up, more bags and boxes of donations show up at the door.”

We took a break to worship with several members of the Seniors group. They have a nice chapel room with traditional pews in addition to several plush recliners. When we remarked about the comfort of the recliners, one lady joked, “Sometimes we sit in the pews to feel like we’re really at church.”

We shared laughs, sang favorite hymns and recited favorite Bible verses. Most of us shed a few tears as we considered the great sacrifice and love shown us by our Savior.

After lunch as often is the tradition with many missions, we went to explore the area. We headed off to Cumberland Gap National Park, about a 45 minute drive.

In the past the beautiful Appalachians were a great mountain barrier to those heading west. We were able to hike in the footsteps of yesterday’s travelers and see one of the few crossing points on the way west. The determination and grit of those pioneers was not unlike that of the women of the UMW over the past 150 years. Both took great risks and dared to stick out their necks so that others might thrive and succeed.

We split up in our volunteer assignments the rest of the week. Lynn’s passion for gardening was welcome at the green house. Sandy loved meeting people and distributing groceries at the Food Pantry.

We all enjoyed a special fish fry on Maundy Thursday when a board member stopped by with fresh Crappie from Lake Okeechobee in Florida. It really is a family setting here at lunchtimes. Volunteers, board members, employees, directors and others enjoy each other’s company over great food.

The seed of an idea that became an outstanding mission in the Kentucky Hills started when a loving Christian man set out to address hate and prejudice with an act of love.

Back in 1925, a Methodist minister by the name of Frakes observed a murder trial in this area. The presiding judge frustrated over the lack of cooperation from witnesses, told the people that he hoped they’d all go home and kill each other. Upset by the remarks, Rev Frakes visited the remote “holler” and noticed there was no secondary school for over 30 miles. He began talking to folks and got them to donate land and money to build a school and bring education to the valley. A man named Henderson donated 68 acres. Rev Frake’s love of God and his neighbors resulted in Henderson Settlement and the uplifting of many children. We met and learned about so many of those successes.

The support of our church and from groups like United Methodist Women has made it possible for the Settlement to grow and continue to offer hope to one of the poorest regions in the United States. We hope you will include this wonderful mission in your prayers and possibly consider volunteering or contributing to their continued success.