Some years ago, a Jewish widow stood by the early grave of her husband.

He had been respected in the community, a devoted leader, a much beloved person. As she stood by grave, she asked her Rabbi: “Is this the end.”  Came the reply, “Yes for him.  But for you, the beginning of new life.”

The new widow was not satisfied.  She asked permission to discuss the matter with a Christian minister—to gain insight into Christian views on resurrection and eternal life.  Her Rabbi responded, “You are entitled to find comfort  wherever you can.”

The woman was furious.   She told her friends, “I did not want comfort;  I wanted to know something of the integrity of life.  I want to know how I can make sense of a universe in which a mere bit of displaced matter can end such a grand center of creative good in the community as my husband.”

A few days later, a Christian minister arrived at her home at her invitation.  When he arrived, he found 30 people eagerly gathered to enter into dialogue on the Christian meaning of death, resurrection, and eternity!

Our churches will be filled to capacity or more this coming Sunday.  Many of those who come will be eagerly gathered to hear some hopeful, intelligent, and promising word.  Not all.  But many.  So be alert and attentive.

Some years ago, I was making pastoral visits to a member with cancer.  He had undergone several experimental forms of chemo .  Obviously, he was losing the battle.  We tried to talk.  He refused to acknowledge or discuss the fact that he might be dying.  As I left his home that day, I told his wife, “If he wants to talk, call me.” 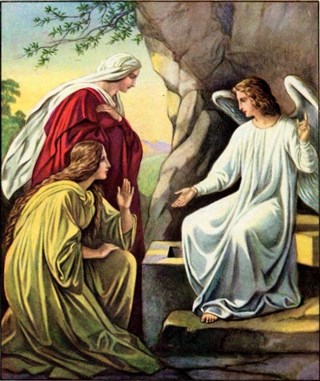 A few days later, early one morning, she called. I visited him once again.  He gave me a strange and apprehensive glance.  Then he said, “Don’t  think I’m crazy.  But I need to tell you what happened last night.  The door to my room opened, and a ‘presence’ was in the room.  He took my hand.  No words were spoken.  Somehow I no longer have a fear of dying.”

“I don’t think you’re crazy” I said.  “I think you have personally experienced the power of a resurrection faith.”

We need not analyze Easter.  Instead, we come with Peter and others to the empty tomb.  (John 20)  We look with amazement at the Angel perched at the entrance.  We see his misty breath as he says, “Jesus is risen.”

Look inside the tomb.  See the empty space.  Know that it somehow happened.  Know that God is infinitely more powerful that Roman Imperialism and death.  Know that Easter happened for you.  And give others that same assurance in the most creative, convincing way you can.