Creating a Culture of Kindness

A few weeks ago, my family and I had the opportunity to take a quick trip to Disney World. Disney is known for many things, but one thing that brings people back again and again is the atmosphere they create. I’ve made numerous trips to Disney parks over the years because I suppose I believe in what they’ve created. In fact, I even spent a brief time working for them in entertainment. So I was thrilled to be going with my young kids and husband, together as a family, for the first time. We had a wonderful time, as I’ve come to expect. Yet, what struck me on this trip was how the people, whom Disney calls guests, are often the ones creating the magic.

We got to our hotel at Disney World after a delayed flight and short bus ride just in time for dinner. As we waited in the lobby of the hotel restaurant we had sparse conversation with a man and woman nearby. The couple found out it was our kids’ first visit, so they offered a few tips like where to get their “First Visit” pins. The woman was celebrating a birthday (sporting another classic Disney pin). Then they were escorted off to their table, ending our brief but kind interaction. Later, after we were seated and ordering dinner, a waitress approached our table. She was carrying two drinks and we met her with looks of confusion as we hadn’t ordered them. She shared, “my table over there bought these for you,” gesturing toward our new friends from the lobby. Our kids’

eyes lit up as she placed the drinks on the table; souvenir cups with light up characters attached. They were so pleased; these were, after all, much cooler than what Mom and Dad had ordered for them. My husband and I mouthed “thank you,” in surprise, across the dining hall. And that was that. What I keep thinking about, though, is that these two people we never met and wouldn’t see again loved Disney so much, they wanted to share that with our children. They wanted to enrich the experience and ensure that the first meal we had, on the kids’ first trip to Disney, was memorable and magical. It was the guests who brought the magic that night.

We were at Disney just three nights and two days, but this was not an isolated experience. The next night, as we returned to our hotel on a relatively empty bus we met a family with two elementary aged boys. The father started talking with us and pulled out a plastic sword he’d just received while having dinner at Cinderella’s Castle, offering it to our son. In quick succession, the mother pulled out the wand she’d been given, offering it to our daughter. The man laughed as he affirmed our son’s question that “yes” he could keep the sword, saying “what am I going to do with it?” Both his sons had received one of their own. They were a lovely family and we bonded on our brief bus ride over a love for their home state of Wisconsin, while we exchanged stories about what we’d done that day. Once again, it was the guests that brought the kindness and the magical, unexpected moments of our day.

Before you miss my point, it’s not about the gifts the kids received, but rather the intent behind them for me. Disney has created a culture. It’s a culture of joy, of unexpected kindness, and of magic making. It’s a culture that values people and invites everyone to participate in the dream. Walt Disney once said, “You can design and create, and build the most wonderful place in the world. But it takes people to make the dream a reality.” He also said, “Do what you do so well, that they will want to see it again, and bring their friends.” The Disney Company is achieving these dreams; the people I encountered on our recent trip are evidence. People come, they share and they participate. People, who are unaffiliated with the company, make the dream a reality. 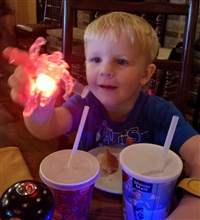 What does all this have to do with the church?  I think quite a bit. If Disney can create a culture that’s influencing people so much that they come, share and participate in the magic making, how much more ought we as the church? As we seek to make disciples of Jesus Christ for the transformation of the world we have to remember that it’s not only about building a place, or telling the story, or the job of employed staff, though each of those things are important. Most often, you are the one who creates the magic. You influence how a guest experiences the church and whether or not they want to return.  The world can be changed by how we live, by the culture we create.  God has promised to give us power through the Holy Spirit to do this. Come, share and participate in creating the dream. Surprise someone today with an act of kindness, offer conversation, give freely. Others will see your witness and follow.