3/18/2020
Lynn Sibley and Sandy McKee are serving as WPAUMC Mission Ambassadors. They traveled to sites in the U.S. and Ireland in 2019.

It’s been a busy year for us. After completing our visits to four mission centers, we’ve been sharing what we’ve learned at MissionU and churches around our conference. Our mostly UMW audiences have been receptive and generous in supporting the missions.

There have been changes too in the months since our earlier blog posts:
When we visited McAllen, TX, last June, lines of migrants seeking asylum at the border were long. The U.S.respite centers where churches reached out to newly processed migrants, providing food, clothing, toiletries and support were very busy. Migrants would be dropped off by the government at these centers then move on to stay with family in the states or sanctuary cities. One respite center was seeing 500-700 migrants a day. Today the picture has changed dramatically. Very few migrants are coming to the respite centers. 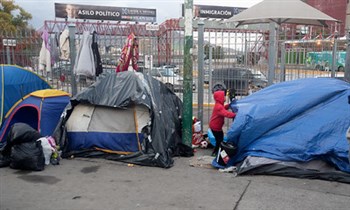 Trump administration policies now require migrants to await their hearing for asylum in Mexico. A U.S. Circuit Court ruled against the policy. The ruling is on hold amidst fears of large numbers rushing to the border crossings. There are estimated to be over 55,000 waiting in dangerous Mexican border towns. Over 600 have been seriously injured. Most are poor and lack food, shelter and clean water. The wait for their hearing can be many months or even years.

The Methodist churches in the U.S., as well as other churches of other denominations, are working together to help the Methodist church and others in Mexico address the crisis. We recently spoke with Susan Hellums who coordinates mission activity for the Methodist Church in the Rio Texas Conference. One example she shared is that her church is one of fourteen churches that are working together to make snack bags and sandwiches which they take across the border each week to respite centers. Others are taking medicines and other needed support. The Good Neighbor Settlement House in Brownsville, started by UMW, takes a food truck across the border.

Susan said that another new development was the use of virtual asylum hearings. But It’s become more and more difficult to be granted asylum, with some estimating over 90 percent will be denied asylum. For example, domestic violence and/or poverty are no longer reasons to be granted asylum. Susan said that they are training mission volunteers to accompany those seeking asylum to their hearings. This project assists those seeking asylum with language and moral support.

United Methodist bishops of the South Central Jurisdiction have issued a call to address the humanitarian crisis in the border area. They call on all of us to pray and work toward:
Prayers and donations are needed and welcomed. Send contributions to:

Make checks out to “El Valle District of the UMC”. On memo line write “immigration relief”.