By David R. Grinnell, Commission on Archives and History

One hundred years ago, in 1921, a small group of dedicated Christians living on Pittsburgh’s Northside met and formed the Charles Street Mission of the Methodist Episcopal Church under the leadership of Rev. B. J. Pogue. It was during the Great Migration, when Black families were leaving the southern states and their rural agricultural economy behind for the hope of new beginnings in the northern cities where there was great need for industrial labor.  The Black population in the Pittsburgh region was blooming and the Charles Street Valley, with its close proximity to the hum of manufacturing in neighboring Manchester along the Ohio River, was a significant draw.  It was also on Charles Street where the family of famed Negro League Baseball player Josh Gibson would also reside. 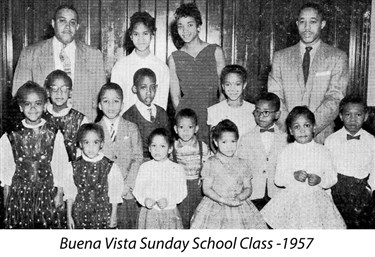 Within a few years the Charles Street Mission outgrew its space and needed larger meeting and worship quarters.  In 1930 they began worshiping in the church building on Buena Vista Street in the Mexican War Street neighborhood.  The building was previously occupied by a congregation that had merged with Calvary Church at Allegheny and Beech avenues.  But the Great Depression was in full swing and it was not easy to sustain the budgets of a congregation still in its infancy. The Charles Street congregation struggled, but with faith in their creator and in each other they would survive.  During this time they shared their space with the Phillips Temple congregation of the Colored Methodist Episcopal denomination, clearly a move that allowed them to share the expense of maintaining their shared worship space.  By 1941, the Charles Street Mission was strong enough to petition the Washington Conference to have a full-time minister assigned to shepherd this now strong and flourishing flock.  Rev. J. D. Foy was assigned the task, which he fulfilled for six years.

During Rev. Foy’s tenure the Phillips Temple CME congregation would officially merge with them and Calvary Church would deed the new Buena Vista Street Methodist Church the building that they had called home for several years.  It was also during Rev. Foy’s pastorate that the congregation twice would host the Annual Conference of the Washington Conference of the Methodist Church.

The 1950s would see new opportunities for the Buena Vista Street congregation.  With the appointment of Rev. B. Milton Hargrove in 1956, came extraordinary organizational skills and the congregation expanded its ministry in many areas including: a young adult fellowship, a Gospel choir, musical concerts, and much more.

In anticipation of the denominational merger (in 1968 to form The United Methodist Church) and its efforts to remove many of the institutionalized racial divisions within the new denomination, the Buena Vista Street Church became part of the Western Pennsylvania Conference in 1964.

While the Buena Vista Street Church survived into the 21st Century, our urban congregations have continued to follow God’s calling and adapted to the changing needs of both the congregation and our communities.  In 2004, Buena Vista became part of the merged New Hope Parish of several Northside congregations, but by 2019 these congregations’ influences were becoming a memory that deserves to be written on the hearts and chronicles of the members of the conference.  So today, let’s remember the great gifts that began with a small band of believers 100 years ago.