Called to Serve – Blessed to Remember…

A few weeks ago, six United Methodist Women from WPA climbed into a rented van and drove nine hours to a United Methodist Retreat Center in Lake Junaluska, North Carolina for Leadership Development Days.  We had plenty of time during our drive to share stories and get to know each other.  As we moved through West Virginia we learned that Sharon Stollings had roots there.  Sharon lived up that road when she was growing up; her uncle has his farm up that road; her husband, Gene, owned land back that road. We all knew that thanks to Sharon, if anything happened to us in West Virginia, she had relatives and friends she could call on to help us out. 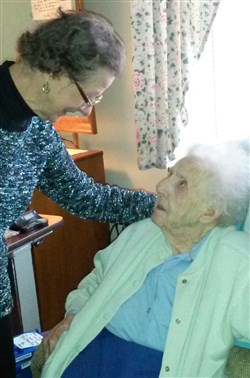 We arrived at Lake Junaluska a day early, so Friday morning we took time for some sightseeing.  It didn’t take much persuasion from Sharon to drop in on the Brooks-Howell Home in Asheville to visit one of her friends from long ago.

Frieda Morris, is old – 101 – the oldest resident at Brooks-Howell.  Decades ago Frieda was a rural worker in Sharon’s home county.  She resourced all the Methodist churches in the county, worked with women and children’s ministries, filled pulpits when needed, and became close friends with Sharon’s parents.

Retirement did not stop Frieda from continuing service. For years she drove to Chautauqua in the summers to be hostess at the Fenton Memorial Deaconess Home.

Brooks-Howell Home has a motto: "Called, Served, Serving Still".  It’s not difficult to understand why Frieda Morris chose to make her home there.

Owned and governed by United Methodist Women, Brooks-Howell Home is open to retirees and staff of the United Methodist Women (formerly Women's Division), missionaries of the former National and World Divisions (now the General Board of Global Ministries) and others approved for residency. A majority of the residents are missionaries and deaconesses.

Sometimes our lives are so fragmented that we don’t take time to be in conversation, to listen to each other, to nurture and celebrate friendships.  Sometimes we need to hear about those who answered God’s call long ago and served faithfully. The six women who traveled to Lake Junaluska enjoyed conversations, shared stories of their church work, remembered what life was like in a different time and place and enjoyed meeting Frieda Morris.  We were blessed…

UPDATE: Sharon Stollings received word from the Brooks-Howell Home that Frieda Morris passed away about a week after the UMW group's visit. It gave additional details of her inspirational service and life well lived.