AC2016 Impressions: Adam Hamilton Gets It!

Sara Richardson served as a Kane District equalization member of the 2016 annual conference. She offers her perspective as a young adult on Adam Hamilton's teaching.

Adam Hamilton, the 2016 speaker for Annual Conference teaching sessions, brought messages that focused on leadership, worship and evangelism. He also brought a spirit of innovation and a consciousness of how the church needs to change to meet the next generation.

From the very beginning of his lecture, Hamilton spoke a lot about young people.

“I don’t believe most young people are responding to the approach to the gospel of the seventies and eighties… I think they respond well to a Wesleyan approach,” Hamilton said. 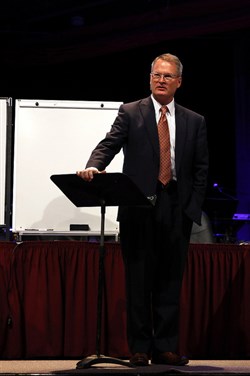 I am a young person. So, when people begin a talk by explaining what young people like, think or do, it tunes me in to decide for myself if they know what they are talking about. By the end of the final teaching session, I decided that Hamilton did indeed know something about young people - or at least the ones like me.

He hit on two concepts that I believe are essential to understanding the character of the upcoming generations: authenticity and social justice. Young people like me are looking for authenticity in people, systems, information and nearly everything we are a part of, and we seek justice passionately in our schools, careers and the world.

Essentially, we want the church to be honest and look like Jesus.

We want to know and completely understand what a church stands for and what difference that church makes by being in the world. We want everything to have a purpose. We want to know why the church believes what it believes. Like toddlers, we are stuck in the “Why?” phase of life.

“If we ask people to sing songs that they don't understand, we’re asking them to do what Jesus said not to do,” Hamilton said.

This was the “BINGO!” moment for me. “He gets it,” I thought. I believe young people are frustrated with the church not because we don't appreciate it, but because we want to know more of it. We want to genuinely, fully and deeply know the true meaning of our faith.

“Are you still the church that will accept a divorced, single mom, barmaid who is leaving Wicca? Because if not, then I don't know if I want to be a part of this church anymore,” Hamilton said.

In that moment, Hamilton sounded like many young people I know who struggle with the church. I will personally admit that I was originally drawn to the United Methodist Church by the statement “open hearts, open minds, open doors.” That, to me, sounds so much like Jesus. That is a church that I want to be a part of, and a church I think young people want to be a part of.

Are we still that church?