A Shepherd Who Stayed Behind?

Occasionally, in my imagination, I see one shepherd who did not go to Bethlehem that first Christmas night.  One shepherd stayed with the sheep while the others ran to see if the news was true.  Why would this have been his choice?  Why did he not go?

He was too tired.  It had been a long week, or a long series of weeks. He did not have the time or the energy to do one more thing

What about you?  Are you simply worn from the pace and competing claims of recent days?  Would it be easier to stay home, build a warm fire, and take a nap?

Or maybe he was too frightened!  Too afraid of the angel?  Too frightened when the sky came alive with light and song? Terrified by all the sounds of joy?

Or maybe he simply felt u 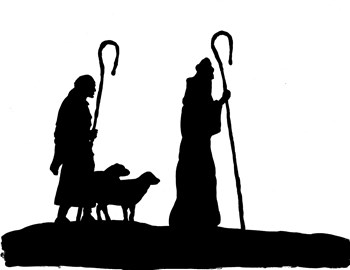 Is that you at Christmas?  Is that your posture?  Feeling unworthy?  Why would God use or speak to such a one?

Or maybe he was just plain skeptical.  What he thought he saw and heard did not really happen.  It was a dream, a hallucination.  Angels don’t sing publicly. The sky does not break into song. It just doesn’t happen.

Maybe that’s where you are as well.  It’s a beautiful story.  But it just didn’t happen.  It’s not easy to believe stories about angels, guiding stars, and such.

All of us—you and me, preachers and congregants—need to come to Christmas with eyes and hearts and everything else wide open.  Take a long look.  Take a good look.

This is a one-time event – unrepeatable, life-changing, life-orienting, life-lifting.  This is the sovereign, eternal God beginning to reveal an eternal message to us in human form.

Christmas changes everything for all time. Gladly acknowledge the incomprehensibility!   Christmas remains inscrutable AND the best news yet!