Recent days have produced brutal attacks, many deaths, and ugly violence in Lebanon and France by a group called ISIS (or ISIL).  Unprovoked and unexpected cruelty in a totally random fashion!  Upon totally innocent people!  What is a worthy Christian response?

Jesus said one time, “Oh that you knew the things that make for peace.” (Luke 19:42)          What will make for peace in our time?  In the face of this strange new kind of evil which has recently emerged? A “war” like no other we have ever known?

Immediate retaliatory violence?  Unleashing the military fury and might of the United States and the Western world upon targets in Syria and other Middle East lands? Calling out Islam as a “false religion” and/or un-American?  Shutting down of all Mosques in America?  Building a wall around our country?  Haughty isolationism with a stronger network of national security? Rounding up and deporting Americans of the Islamic faith? Stuffing hundreds of thousands of Syrian refugees from ISIS back into Syria?

Is it naïve and weak to suggest another Jesus-inspired set of responses?  Compassion?  Food and water (from our land of plenty) sent to areas of critical human need?  Temporary shelter for the refugees?  Courage and faith-inspired poise even in the face of threats of death and destruction?  Suggesting to impressionable Islamic young adults what Jesus meant by the “abundant” life?  Exercising (really doing this!) the power of intercessory prayer?  Contributing financial resources, time, and energy to make some of this happen?

Paul writes wisely in his letter to the Roman Church: “Hate what is evil; hold fast to what is good…Bless those who persecute you; bless and do not curse….Do not repay anyone evil for evil….If it is possible, as far as it depends upon you, live at peace with everyone.  Do not take revenge, my dear friends, but leave room for God’s wrath…If your enemy is hungry, feed him; if he is thirsty, give him something to drink….Do not be overcome by evil, but overcome evil with good.” (Roman 12:8, 14, 17-19, 20-21)

News reports tell of some of this already emerging in Paris this week. 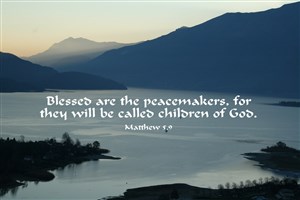 Yes, we need to try to find and bring to trial those who are caught as leaders of ruthless violence and who execute hateful religiously inspired attacks.  But we who are followers of Jesus of Nazareth do not behave as some in our nation suggest, even demand?  We have a higher standard and believe in a new kind of “Kingdom living” which Jesus taught and lived.

Is this weak and naïve?  In today’s world?  Was Jesus simplistic and unrealistic?  I think not.

He once said, “Blessed are the peacemakers, for they will be called the children of God.”  (Matthew 5:9)   I, for one, pray for the wisdom and spiritual fortitude to live that call to the fullest extent possible.  I think this is what Christian leadership means right now.