We’re not in Serbia yet – nor even headed for Serbia yet.  We’re patiently waiting in a vehicle repair place – for the past four hours.  About 11 am an alarm sounded in our VW Van.  It was overheating.  Tsetso proceeded to give it our water; we looked under the van, and the water was running out as fast as he was pouring it in.  What to do?  No AAA in Bulgaria and his phone had no charge.  Kathy had some minutes left out of the 30 she had purchased for international calls, so he got a number for road service from the map in the car and used her phone.  In order to tell the tow truck where we were, he needed to know a highway kilometer marker.  He could see one in the distance, so he told us to sit tight and he would go find out what it was.  When we could barely see him in the distance, a police car pulled up behind us (we’d pulled off on the side of a major highway).  I asked if they could speak English – No.  A couple of phrases, pointing to the engine, and maybe they could even see the water puddle underneath – and pointing to Tsetso coming our way on foot, and the situation was understood.  When Tsetso arrived, he began to have man-conversations with them and worked on options.  He reported to me that the tow truck would cost – 250 leva (about $167).  His phone call to the company in Sophia that was supposed to transport us to Serbia provided an offer add a trip here to get us for an additional 500 leva.  Too much, says Tsetso. 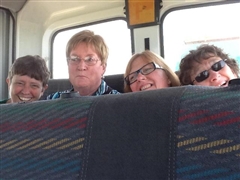 The tow truck appeared, driver’s seat on the left, driven by Dani who owned the repair shop.  He spoke pretty good English and had lived in England for 8 years where he bought all his trucks.  We asked how we could be transported.  No problem he said – he had seats for 7.  See attached – four crunched in the back (in what would have been more appropriate for three), and tall Amy and Tsetso in the front with Dani.  When he learned we were American women visiting and learning about gypsies in Europe, he pointed out a gypsy village as we drove past.  He had some long conversations with Tsetso in Bulgarian in the front seat, but Tsetso didn’t translate everything until we were together in the waiting area (without Dani).  He had fussed in English that he couldn’t find good workers.  Joan wondered, while we were waiting, why he didn’t hire some of the gypsies and train them.  Tsetso’s reply – because he is racist.

So, in all circumstances, we are learning the situation of the Roma/gypsies.  We got here shortly after noon; it’s now after 5:00.  As each hour passes, we figure out what options we have or don’t have.  I think the repair is nearly complete – and the rented car/driver is still waiting for us.  So, for us it all continues to work out.

I never did report fully on yesterday.  We got to the hotel quite late from our time in Burgas.  We had lunch with the pastor and asked our questions, walked through the gypsy ghetto, met with 60-70 children in a rather small room (you can get more children in a room without chairs or tables), presented our puppet show and shared a butterfly craft, and finally, vibrated to the amplification of praise music for a Maundy Thursday in a tight-packed sanctuary (ceiling/roof propped up by 10 “jacks”).  We were able to figure out why Daniel Topalski called this building illegal.  It wasn’t because of ownership; it was because it was unsafe.

Amy’s Facebook entry:  Very intense day today. Went to a church in a ghetto in Burgas. Poverty like I've never seen before. And a beautiful church very much alive with the Spirit of God. Very gifted pastor and his very gifted wife are making a huge impact on lives and the whole community. Mobbed by wonderful children. Very lively worship. Great day. … 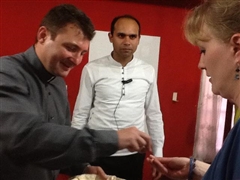 She continues [I’ve attached a picture of her and the pastors.]:  My new pastor friends. The pastor in the middle made the very gracious, hospitable and brave choice to ask me to serve communion in his church with the other guest pastor. He said it is their tradition that women be silent, but he is looking ahead. It was quite an honor. (There is 1 ordained woman of any denomination in all of Bulgaria. She is United Methodist).

It is 3:00 am and we have arrived where we will reside in Serbia.  Five weary travelers are dropping into bed.  More tomorrow…