It’s over.  President Obama has completed his visit to Israel and Palestine and is now on his way to Jordan.   Editorials and comments that I’ve read range from disappointing to amazing in terms of what has been accomplished by his time here.  I have never considered myself to be “political” except that here, everything is political.  I have always shared my own thoughts and experiences based on what I have seen and heard.  So let me do that here:

First of all, from the Palestinian side, I would say that the word that describes best for me what I’ve seen this week is “disinterest.”  I really had thought that there would be more enthusiasm, more excitement, perhaps even more demonstrations during the visit.  But I saw nothing.  I spent every evening this past week in Ramallah where the President met with President Abbas on Thursday.  There were a few posters along the main street coming in from Qalandia checkpoint, but other than that, nothing.  And the posters themselves were peculiar in what they said:  “President Obama, Don’t bring your Smart Phone to Ramallah…  We have no 3G in Palestine.”   It wasn’t long before the posters were defaced and taken down.  I would have anticipated signs about the occupation or the Wall or the checkpoints or some other injustice.  I was surprised by the message, although it does speak to the lack of control that the Palestinians have, even of their own cyberspace.

I had anticipated great disruptions in travel:  road closures, the presence of police, heightened security.  There were rumors that road and streets, especially around the King David Hotel where the President was staying, would be closed and that was true in part, but I was not affected even though I pass daily within sight of the hotel and around the Old City.  I had heard that 15,000 police were to be part of the security detail, but I saw very few.

I only had 2 first-hand experiences of security:  One was Thursday evening when a friend and I entered Ramallah through the Qalandia checkpoint.  Soldiers were present and we were asked to show our passports and permits.  Usually that’s reserved for coming out, not entering.  And today, since I live within walking distance of Bethlehem, I walked to the end of the street to see if traffic was being affected by the President’s visit .  His itinerary stated that he would be brought to the Church of the Nativity by helicopter, but a sudden sand storm and strong winds forced him to come by motorcade.  The main intersection near my apartment was shut down and cars were lined back as far as I could see.  I tried to take my daily route to the bus, but was waved back by soldiers.  At that point, I hadn’t heard about the change in itinerary, but I stood there for about half an hour until finally the barricades were lifted and cars were allowed to pass.

When I returned to my apartment I was very pleased to hear that President Obama had had to go in by car.  That meant that he’d gone through the checkpoint and past the wall and seen first-hand the prison-like conditions that the people of Bethlehem live under every day. 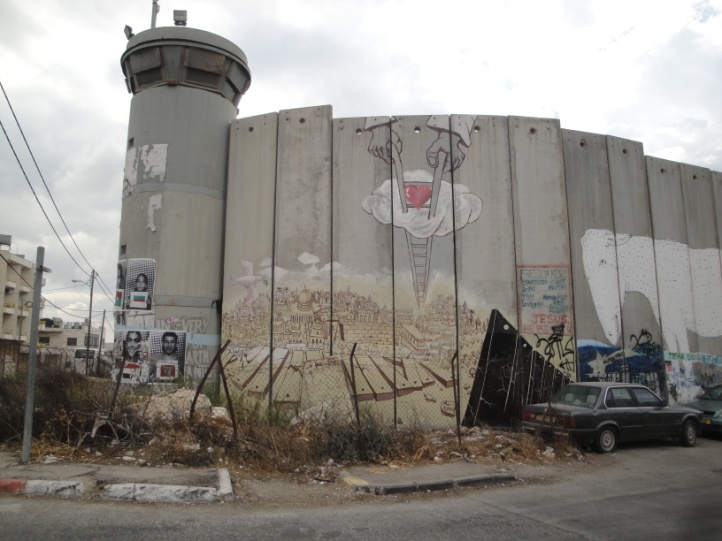 From what I read on Facebook, there was very little enthusiasm in Bethlehem for his visit.  Only a few people watched as the motorcade came through the city and only a small number of people, mostly tourists and ex-pats, were present as he entered the Church of the Nativity.

Expectations for this trip were low.  How many times in the past 46 years have the Palestinian people heard hollow words of “peace negotiations.”   Even the White House gave the impression that this trip would not be productive in terms of re-energizing the peace process.

And yet, there were signs of hope.  Especially on Thursday when the President addressed a group of university students in Jerusalem.  I listened to his speech (and would encourage you to as well).  He began by reassuring his audience of the “unbreakable bond of friendship” between the U.S. and Israel.  He spoke of Passover and its significance in the freeing of a people from bondage.  As I listened to his words, I could imagine that he was implicitly referring to the struggle of the Palestinian people to be released from their bondage as well.  He spoke of security and of peace.  And what I found to be the most powerful message, was his humanizing of the Palestinian people.  He asked the Israeli students present to “walk in their shoes” and to engage them in a way that would help them to come to a mutual understanding of each other’s humanity.   And, again, what was heartening, was the applause that was a response to his words.  There was hope in the applause; there was a desire for peace, and not just peace, but peace with justice!