Myrna Bethke, our host pastor, connected us with a couple of small jobs in Sea Bright, a spit of land between the Atlantic Ocean and the Shrewsbury River – where the two bodies of water met during Hurricane Sandy.  There was work and conversation during the day with people needing assistance.  Each team member had unique conversations that revealed pieces of the puzzle as they were shared when we met together after supper. 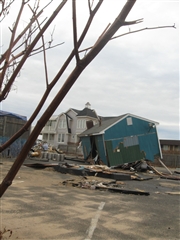 Sue Sphar-Calhoun shared Jorge's story:
"Jorge is a quiet dignified man plainly dressed in jeans and a tee shirt.  He stands outside his home of eight years waiting patiently for the insurance adjustor to arrive.  From the outside the house looks like it has not sustained much damage.  Yet inside tells another story.  There is nothing left except studs where walls used to be.  There is a mark on the front door about ¾ of the way up, where the water came up to. He has lost his job.  The restaurant that he worked in has been damaged and he doesn’t know if they will re-open.  He is receiving unemployment, but there is no way it will pay for the re-building of his home.  But he insists that he will re-build.  This quiet man touched my heart.  He is facing massive devastation with dignity and resolve to go on.  You see it everywhere in the small beach front town of Sea Bright, the determination to go on and not be defeated by the weather.”
I got to know Herby and Desiree who lived in the first house our team worked on.  They stayed in their home and weathered the storm – watching the water come over the flood wall, up the street, and into their house.  They lost electricity and phone service, and their cell phone died.  Now they are staying in a motel in Red Bank, grateful for the help of volunteers who have gutted their home, sprayed bleach water to kill the mold, and pulled nails from floor joists so that when everything dries out, volunteers will be able 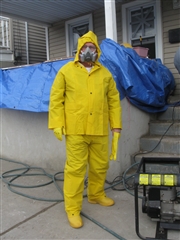 to help them rebuild.  They have no flood insurance, are still trying to figure out their options, and like everyone else, worry about what “codes” the federal government will impose on them, and how their community will fare.  We’ll return to their home tomorrow to finish the Early Response work that needs to be done.  Then they wait – for everything to dry out – for the government to publish the new codes – for other volunteers who might help them rebuild their lives.
Supper tonight was chicken fingers, mac and cheese, salad, and chocolate frosted brownies.  Sound like what your children or grandchildren order when you take them out?  Wednesday is youth night at the Red Bank UMC and we were their guests for dinner.  We offer them our time and talent; they offer us their gracious hospitality.  Team meeting followed, then showers at the “Y” and now everybody is asleep but me.  Time to finish this blog – for tonight…
Diane