Western Pennsylvania's first team of volunteers arrived in Redbank, NJ December 4.  Setting out from three locations in three vehicles, the seven team members from six districts all arrived at RedBank UM Church within three minutes of each other. 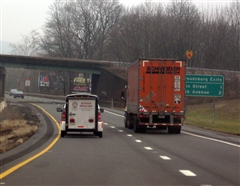 A little walking around this charming town allowed us to find the grocery store (ice cream was purchased for supper) and the “Y”, where we will walk for our showers after their youth swimming program ends each night at 7 p.m.

Myrna Bethke, pastor of the Red Bank United Methodist Church, and her husband, Drew, joined us for supper.

Taking to heart the challenge that all church members can support mission outreach, either as prayers, payers, or players, 90-year-old Ola Cox paid her daughter Candy Connor’s expenses to join the WPA team, then sent along stuffed pepper soup as the Tuesday evening meal.  Daughter Dixie Agnew sent along high fiber cookies and promised to pray for the team.

Joe Deible's church laid hands on him during a service, prayed for him and the team, and took up an offering of $300 to send with him to assist where needed. 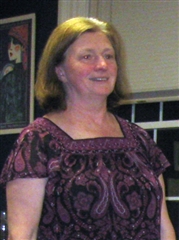 At a team meeting after dinner Tuesday night, Pastor Myrna filled us in on what teams have been doing, promised to take us first thing in the morning to Sea Bright where we would be working, and left to get a power washer and a shop vac for our use tomorrow.

United Methodist connections seem to be found everywhere. We were pleased to learn that Myrna worked for awhile in Western PA with camp ministries in the 1970’s.  Her church was undamaged by Superstorm Sandy, and quickly became involved in outreach to individuals, helping nearby communities, and hosting volunteers like us who are arriving from other conferences.

More tomorrow.  It’s been a long day and everyone else is in their sleeping bags.