It is humbling to see all your worldly possessions in one truck.
We think we own so much; we think we have accomplished so much; we think we are so important, but in moving God reminds us of who we are and who God is.  We watch the truck go down the street and sit in the empty house and are humbled. 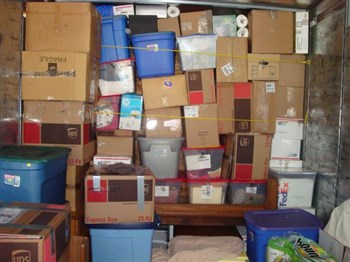 It is easier to move into a big house than a little house.
For four years we lived year-round in a cottage design for summer use.  We had to re-sort our storage items five times in the first year.  You had to think and plan before moving anything.  In a big house stuff slides in as smooth as a gravy sandwich.

Technology has complicated moving.
I can remember when the house phone stayed on the kitchen wall and the TV only had rabbit ears that needed to be pulled out.  It was easy to move.  Now cable, Internet, phone, Wi-Fi, Apple TV, video games, printers all need to be hooked up.  They seem to laugh at you as you make feeble attempts to make them work in your new home.  Welcome to the mission field.

No one owns any junk.
OK, we all move some junk.  At least what other people would call junk, but to us it is precious and necessary.  It’s not junk -- even if it is heavy, we haven’t opened the box since last move or we aren’t even sure what's in the box.  It is ours, we own it, and we have moved it before. Maybe when we move so often we need a few security blankets or boxes to lug around.

The Holy Grail of owning your own house isn’t so holy.
I once owned a house in New Jersey.  It was a one-third-of-a-million-dollar home.  It had two bedrooms, the siding was falling off the back and the basement flooded.  And if God had not delivered us back to Western PA, we would have been so far “under water” financially that we would have needed scuba gear to go to the bank.Not so holy.

God is always moving.
We think of God as static, a rock, unmovable and steadfast. But anything like that cannot last. Even the bridges we drive over move, expand and contract all the time, otherwise they would collapse. In moving I am reminded of the constant stability in the fluidness of life and creation. I am reminded that God is always on the move, moving here and there, forward and backward and moving us along for the ride.