Prayers for the Kim Family

I received the sad news this morning of the passing on Nov. 3 of Rev. Hae Jong Kim, who served as Bishop in Western Pa from 2000-2004. Family and friends were with him when he passed. 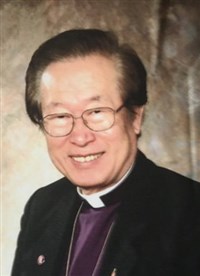 Please join me in praying for the Kim family, especially his children and grandchildren, who are still mourning the loss of their mother Wha Sei Park Kim. I pray they find comfort in knowing that their father is again with his beloved wife of 57 years. Wha Sei Kim passed away on Sept. 15.

Hae Jong Kim survived the Korean War as a refugee with his mother, brother and two sisters. He worked as a U.S. Army chaplain’s interpreter at age 17 to support his family after his father died. During that time, his mother converted to Christianity and offered her four children to God.

After coming to the United States to study at the Methodist Theological School in Ohio, Hae Jong Kim was ordained in the United Methodist Church, served as a pastor and district superintendent in New Jersey and in 1992 became the first Korean-American to be elected a bishop. He served in what was the NY West Conference from 1992-2000, then was assigned to the Western PA Conference. When he retired from Western PA, he returned to New Jersey and served for a time at Drew University School of Theology, where he had earned his doctor of ministry degree.

He often preached on the importance of knowing one’s roots and he helped to develop several ethnic churches. In Western PA, he made efforts to help adopted Korean children get to know their roots. But he also stressed being rooted in Christ.

Our Christian roots, he often said, give us wings and we can “mount up with wings like eagles.” It’s a comforting thought.

Arrangements are being handled by the Frank Patti Funeral Home.  Visitation is scheduled at the at Korean Community Church of NJ, at 9 a.m. Saturday, November 7, 2020. The memorial service will begin at 10 am, with internment at 12 noon at the George Washington Memorial Park in Paramus. Livestream at: youtube:kccnj.

In lieu of flowers, contributions may be made to the Korean Community Church of NJ "Missions", 147 Tenafly Rd, Englewood NJ 07631.