From Clark Remington:  Today, in Carrefour, four of our team members taught English as a Second Language. Thirty-three eager young people ranging in age from 12 to 22 years old participated.  Clark Remington conducted introductions—“My name is… “ and  “How are you?  Kimberly Greway led the students in several rousing verses of, “”Head, Shoulders, Knees and Toes.”  Ken Hendratta drew a picture of a human body and we labeled various parts.  Louanne Baily led the gang in several spirited games of, “Simone Says.” We broke into groups and took walks labeling the sky, the sun, a car, clouds, flowers and trees.

These Haitian young people had dressed neatly for the class and were very respectful and cooperative.  Immediately sitting in seats, they were ready to learn!  Our team thinks l’étudiants sont formidable!

From Ken Hendrata:  Children always amaze me with how fast they learn new things. Clark, Louanne, Kimberly, and I started with reviewing the lessons from yesterday (greetings, body parts, the “Heads, Shoulders, Knees, and Toes” song, several nouns, colors). Some children were shy to speak up or participate yesterday, but we came with a plan: bribery. 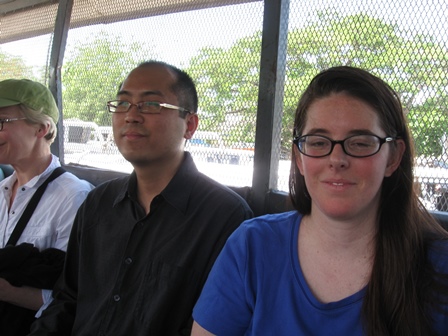 We stopped by a local supermarket (it was so nice, tidy, and cool that I was thinking about just hanging out over there – it had Skittles and amazing cookies branded “Casino”, what more do I need to survive?) and got some “healthier” candies: yogurt candy and a kind of “sesame brittle” (with more sesame and less sugar). That seemed to do the trick. At various points throughout the day we even had to curb the enthusiasm of the students.

Today, we combined what we learned yesterday to describe colors of yesterday’s nouns (“sky”, “sun”, etc.). We also had students draw cars with crayon and asked them to stand up and say, “This is a ___ car”.

Just as we were finishing our review from yesterday, Pastor Ralph came in to ask us to talk to the teachers who were about to leave for the day. Clark (who is a professor of education) and Louanne seemed to be the most relevant on this matter, so they went with Pastor Ralph, while Kimberly and I were left behind and “guarded the fort” (almost literally).

Kimberly is skillful in getting people to behave. I’m not sure whether she gets it from her parents’ upbringing (they were teachers), the jail, or just her experience with me. Kimberly went over the colors using more time this time around, and we eventually got the students to say, “My name is ___ and I am wearing ___ and ___, “ and them to pair up and say, “He/she is ___ and he/she is wearing ___ and ___.” That was quite a lot of fun. I was her gallant assistant, writing the words and colors (blue, red, purple, etc.) and showing a matching crayon every time she asked the students to recite them.

Clark and Louanne came back to finish up the review, and then they took half the class outside to learn new nouns. Kimberly and I were left alone again, and this time, we went over verbs and family members (father, mother, sister, brother). We went over “wear”, “point”, then we went over “come”. First, I went to another end of the room and said “Kimberly, come.” Kimberly would walk over to me, then I moved away again and this time, Kimberly said “Ken, come.” We then pointed at a student and said “come.” That student would stand in front of the class and shouted another student’s name and said “come” until everyone was standing in front of the class, then we taught them the verb “sit” to get them to sit back at their desks. Needless to say, they were much easier to teach than our little beagle “Duke”.

At the end of our class, we even taught the children arithmetic in English. Forty divided by two plus ten equals? At this point, everyone in the class was shouting their answers in English. It became a competition over who knew the answer. The first would get a treat.  Mind you, neither Kimberly, Clark, Louanne, nor I came up with the problems. It was a student who did that. She received a treat as well.

At some point, we had about 45 children in a room that is 15 feet by 20 feet, with children bringing benches from outside for seating and elbow-to-elbow arrangement. It was a good morning.

From Diane:  The team continues to ask questions, listen, and learn about Haiti and the precious people we are meeting.  My Internet session was cut short last night because electricity went off.  I’ll try in another email to send some pictures.