I listened to the rain through the night beating down on metal roofs – and worried about how we would cope with children walking to the church through the rain.   Where would we play games we planned on doing outside?  When it finally got light enough to see out our bedroom window, I discovered the sound of water beating on metal was because the roof of the house next door had a rain pipe draining water off the roof straight onto the roof of a van parked underneath.  As the sky became lighter we were blessed with another day of sunshine, hot with a breeze. 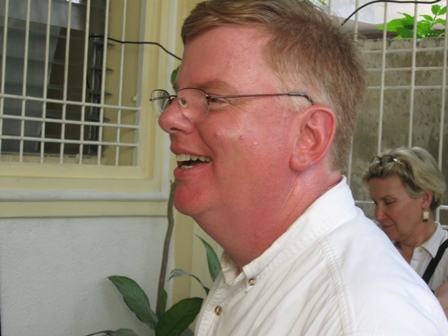 Steve (another translator) joined Peterson to translate today – And we were ½ hour late getting to the church.  Everyone else on the team seems to be handling “Haitian time” better than I am.  I need to chill!  Children were playing in the church yard when we arrived, there were three Haitian Sunday School teachers waiting to assist us, and more children arrived as time passed.  We spent a little time sharing our lesson plan with the teachers while Tom and Liz played games with the children outside using the tennis balls decorated by the Mt Lebanon Youth.  They had printed “bondye renmen w” (God loves you) on each ball and added colorful pictures and symbols.

Clark and his team (Louanne, Ken and Kimberly) went to one of the elementary classrooms to work with 35 students learning to speak English (from ages 12 to 22).  They had a variety of activities planned, working sometimes with the whole group, sometimes splitting them into smaller groups. 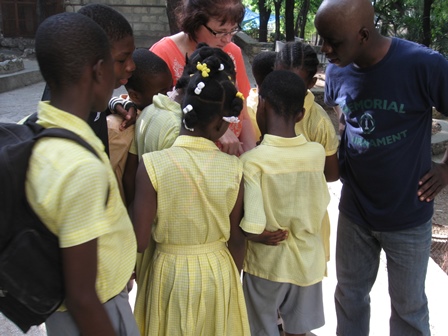 Lori Barr and her team (Diane, Kathleen, Liz, and Tom) moved the VBS children (about 45 of them) from the outside games to singing in the Sanctuary.  We taught the English words to “B-I-B-L-E,” with five children holding the letters up front.  They sang the Haitian Creole words to us.  We taught “Deep and Wide” in English; they sang it to us in Haitian Creole. The children taught us some of their favorites.  I need to write down the words and music tomorrow to hold them in my mind; I think Mt Lebanon children will enjoy learning them!

The music was followed by the story of Jesus Calming the Sea, told by Lori in English, translated by Peterson.  We added sound effects for the storm by clapping fingers, building up to hands, and tomorrow we’ll review and add some foot stomping.  Lori had put together a craft of a cut-out boat on a popsicle stick riding the waves of an angry sea; a Bible verse from Acts was printed at the bottom of the sheet:  “I can trust God to give me the power to face all my fears.”  The children cut out the boat, colored their waves, printed the Bible verse in Haitian Creole (Mwen ka fe Bondye, pou ban m’pouvwa pouf e fas a tout sa m’pe.).  A little more music followed, then the children went outside to play.  We were so blessed to have the Haitian SS teachers working side-by-side with us.  They played musical games with the children and worked closely to assist during the lessons.  A snack for the children was provided to finish Day 1 – Carrefour VBS/ESL.