Who Is My Neighbor?

Who is my neighbor?  Not a question that hasn’t been asked before!

If you want to hear an excellent presentation on this question, check this video  It was a talk given by Munther Isaac at the Christ at the Checkpoint conference held earlier this month in Bethlehem.  Munther (since the conference he’s become Dr. Munther Isaac, having received his Ph.D. from Oxford last week.) is a professor at the Bethlehem Bible College and is one of the leading young Palestinian Christian voices.  In fact, I read today that his name was on the list of 101 culturally diverse Christian voices from around the world .

What was interesting for me as I listened to Munther’s talk is that I was experiencing the very thing that he was talking about.  Some of you might know, having heard me speak, that I have an apartment on the Jerusalem side of the Wall, just outside of Bethlehem.  The house where I live is owned by a Muslim family, and the apartment is located on the bottom floor.  It’s completely self-contained and very private.  I’ve been here now for 6 years and it’s definitely home.  Because of my schedule I rarely see anyone who lives here, and have often felt guilty for keeping so much to myself. 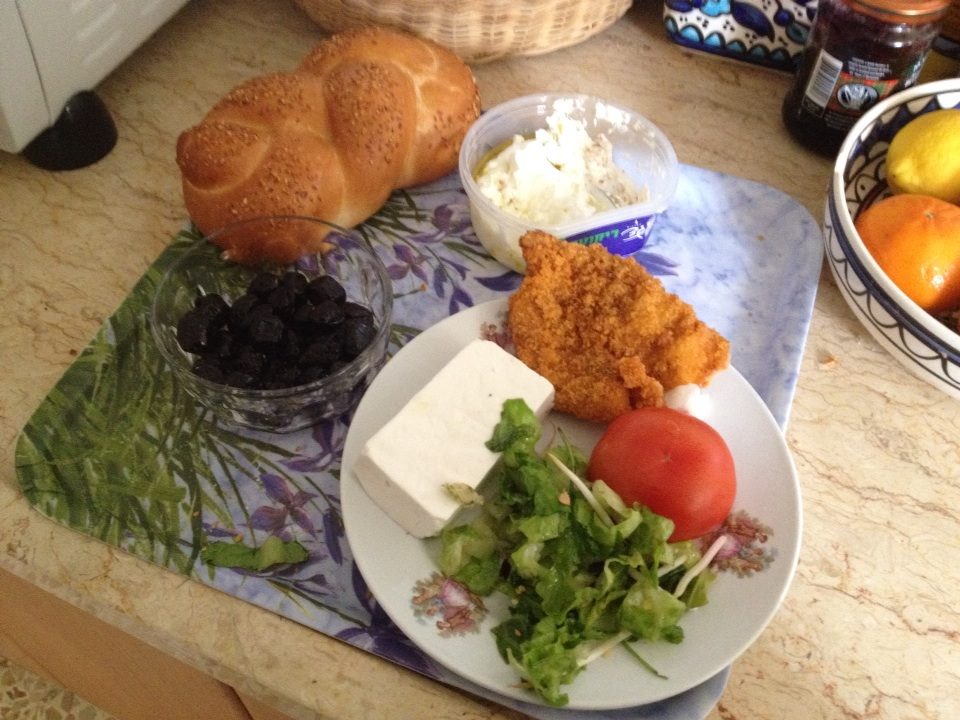 Two weeks ago, though, something happened to my knee and I wasn’t able to walk.  A volunteer from the Bible College had to help me home and as I tried to maneuver around my apartment on one leg, I got a sense of how alone I was, so far away from family and familiar surroundings.  The next morning there was a knock at my door and the son of my landlord came to ask how I was.  His father had seen me the night before being helped down the stairs to my apartment and wanted to make sure I was OK.  My landlord had suffered a stroke a year or so after I moved here and isn’t able to walk so I rarely see him, but he’d been looking out his window when I’d arrived.  His son, Ramzi, has been living here for the past 5 months, and otherwise lives in Sweden where he is working on a Master’s degree.  We talked a bit and I felt much better knowing that my condition was now known and I wasn’t alone.

But what I wasn’t prepared for was the care that followed.  Less than an hour after Ramzi left, he reappeared with a plate of olives, cheese and bread.  An hour after that, my upstairs neighbor Arij, Ramzi’s sister-in-law, brought me a plate of chicken and salad.  I was overwhelmed and very grateful.  The next day, and the day after that, more food appeared along with offers of going to the grocery store and taking me to the local clinic.

A week later, I had an appointment to see an orthopedic doctor.  When I suggested to Arij that I ask a friend to take me, she responded emphatically that I shouldn’t do this, that I should keep it in the family and that she or her husband or Ramzi would take me.  I thought I was being thoughtful by not relying on them so heavily, but I realized that I was actually offending them by going outside the family for help.  I learned that taking care of family and neighbors is central to living the Muslim faith.  So, as it turned out, Ramzi took me to the doctor and stayed with me for two hours until I finished with my appointment.

It’s interesting how we, as Western Christians, hear the question:  Who is my neighbor?  If you’re like me, you put yourself in the position of the “helper” and wonder how you would respond to the other, the person who is in need, whoever they are.  But this week I realized that I was the neighbor.  I was the one who needed help and it was a Muslim family and friends who came to my aid.

Munther, at the end of his talk, spoke about the story of the Good Samaritan and asked, “what if we replaced the Samaritan in the story with a Muslim?”  I didn’t have to answer the question; I lived it.