Appointments effective July 1, except where noted. 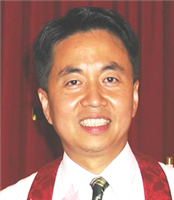 Announced: 03-06-2022
About Sang Kong Choi
Bishop Cynthia Moore-Koikoi has announced that she will appoint the Rev. Dr. Sang Choi as Superintendent for the Kane District, effective July 1.

Rev Choi will bring a number of gifts to the Kane District including effective leadership experience in rural and suburban churches and in starting a new congregation.  Rev. Choi earned a Doctor of Ministry in Church Servant Leadership from Wesley Theological Seminary and a Master’s level degree in Pastoral Care and Pastoral Theology from Princeton Theological Seminary. He is a graduate of Seoul Methodist Theological University in South Korea and earned his Master of Divinity degree from Drew Theological School. University in New Jersey.  He has completed the United Methodist Foundation's Pastors Academy for Stewardship and completed Clinical Pastoral Education at Overlook Hospital in Chatham, New Jersey.

Rev.Choi has an evangelical spirit.  He first experienced a call to ministry during his childhood living in a parsonage, but after immigrating to the U.S., he was "struck by grace" during a retreat similar to the Walk to Emmaus. He experienced what John Wesley called  “enlightening of divine grace.”  He has a deep commitment to the spiritual disciplines of prayer, fasting, and discernment.

Rev. Choi is deeply relational.  He is clear about his personal convictions and has demonstrated an ability to work with people with many different perspectives and from many different cultures. He served a brief time in overseas mission experiences with indigenous tribes in Canada and Peru.

In 2001, Rev. Choi was commissioned by the General Board of Global Ministries and appointed to the Pittsburgh District to launch new Korean congregation, which met at Mt. Lebanon UMC. He served there for five years before being appointed to serve Houston and Bentleyville UMCs.He then served at Erie First UMC from 2013-2015, when he began serving in his current appointment at Christ UMC in North Huntingdon.

Before coming to Western Pennsylvania, Rev. Choi served churches in the New York and the Detroit conferences, so he will bring to Kane experience with cold weather and snow.  He will also bring with him a spirit of joy. One of his favorite Bible verses is 1 Thessalonians 5:16 which reads, “Rejoice always, pray continually, give thanks in all circumstances, for this is God’s will for you in Christ Jesus.”

Rev. Sang Choi is joined in ministry by his wife Grace Choi.  They have two grown children. Jeannie is a graduate student atCarnegie Mellon University and Tiffany is a Laboratory Technologist at Allegheny General Hospital.

About Kane District Superintendent
From the rolling farmlands of western Warren County, to the scenic beauty of the Allegheny National Forest, to the ancient wonder of the Appalachian foothills in Elk, Cameron, and Potter counties, the Kane District is a place where the glory of God’s Creation is on full display. The largest of our 10 districts by land area, the Kane District is comprised of all or part of seven Pennsylvania counties – Cameron, Clarion, Elk, Forest, McKean, Potter, and Warren.

The phrase “town and country ministry” is an excellent way to describe the ministry settings in the district. Many faithful and creative lay and clergy leaders are reaching out to their communities in rural areas, towns, and a few small cities.

This district supports the work of three historic United Methodist ministries that are located within its bounds – Wesley Woods Camp, Olmsted Manor Retreat Center, and the Ruth M. Smith Center. To equip and deploy its people for the mission of making disciples of Jesus Christ for the transformation of the world, the district has organized into cluster groups, expanding efforts in cooperative ministry and bringing the words of Ephesians 4:16 to life – “From Christ the whole body, joined and held together by every supporting ligament, grows and builds itself up in love, as each part does its work.”