Anchored in Christ, based on Hebrews 6:19, was the theme for the 2022 Western Pennsylvania Annual Conference. The annual conference met June 2-4 at the Erie Bayfront Convention Center in Erie, PA. The session included ordination, Bible studies and plenary sessions, concluding on Saturday with a memorial service. Masks were required at all times due to an upswing in COVID transmission in the region. The event was streamed live. Clergy session was held late in May at Dutilh United Methodist Church. 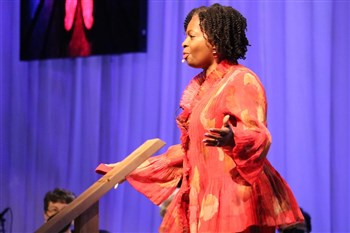 Paul Huey was elected as the new Conference Lay Leader. He had served for the past year as co-Lay Leader with Sharon Gregory, who served for several years in the position and at one time also served as president of the United Methodist Association of Lay Leaders for the past year. In a message on Saturday morning, he reminded laity that they too are called into ministry and if they accept the call may effectively minister in their communities and beyond. He honored Sharon Gregory for mentoring him in the role and for her years of leadership. The vice-chair of General and Jurisdictional Conference Delegation Vicki Stahlman, joined by the co-chairs of the Episcopal nomination team Janet Lord and Katherine Fehl, requested suspension of conference rule 2.3.10.7 (the procedure for episcopal endorsement and nomination) to allow two elders to be brought forth for consideration. This rule was suspended, and Revs. Alyce Weaver Dunn and Robert F. Zilhaver were elected as episcopal candidates. This was the first time a woman has been elected as an episcopal candidate in Western Pennsylvania.

Bishop Moore-Koikoi shared her State of the Church Address through a video highlighting ministry and faith throughout the churches of the Annual Conference. Ministries showcased included a new senior center, a district partnership with a district in Zimbabwe, an anti-poverty campaign and other ministries.

In her video address, the Bishop said:

“I stand here at the foot of the Jumonville cross thanking and praising God for you and your faithfulness.  I stand here humbly thanking God for the privilege of being your bishop, for the gift of being a part of this annual conference and for the sense of family I feel being among you.  I stand here at the cross to declare that the evidence is in and there is no doubt; God is near. God has got us. And we have got a mighty God. I stand here to declare, God is not through with us yet. God continues to use this annual conference in miraculous ways to make disciples for Jesus Christ for the transformation of the world.  And I am convinced that as long as we stay anchored in Christ, God will continue to use us in a mighty way.” 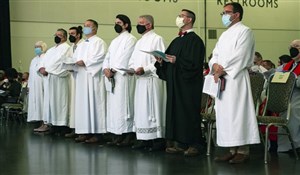 The Rev. Dr. Asa Lee, President of Pittsburgh Theological Seminary, preached at the ordination service on Thursday evening, June 2. His sermon entitled “Invited to Fish” focused on Matthew 4:19. He offered a word of encouragement to the ordinands, saying, “I pray that you will always be faithful to what God calls you to do in your life in ministry, for faithfulness is the common denominator. Faithfulness is what it means to follow. Faithfulness knows the sound of the savior. Faithfulness may take you to your own rugged cross, but in Christ you will have a sure foundation. Faithfulness is what we are called to and while we are not always successful when we are faithful, God will be glorified. And you will be edified. There is only one person inviting you to go fishing. That is Jesus. You better bring your own pole and your own net.”

Bishop Moore-Koikoi led Bible study on both Friday and Saturday mornings before the plenary sessions, reflecting on the Book of Hebrews.

Reports from each of the Conference’s Five Areas of Focus were presented. View these videos on Youtube.

Bishop Moore-Koikoi recognized the service of 29 retirees who had a combined total of 633.5 years of service. Seventeen retirees who were present and their spouses were honored at a luncheon.

The Rev. Rob Wilson preached a powerful message titled “Hanging on to the Line,” emphasizing the importance of disciples casting nets and anchoring in Christ’s love in the midst of grief. He preached from personal experience, both as a pastor and as someone who grew up in a family of commercial fishermen.

Bishop Moore-Koikoi determined that one piece of legislation, For Disaffiliation Agreement Pursuant To ¶2553, was not properly before the body, giving a Ruling of the Chair on this item as a Decision of Law, which will be forwarded to the Judicial Council.

Legislation pulled from the Consent Calendar and brought to the floor for discussion included:
Find links to legislation, budgets and other reports at wpaumc.org/AC. 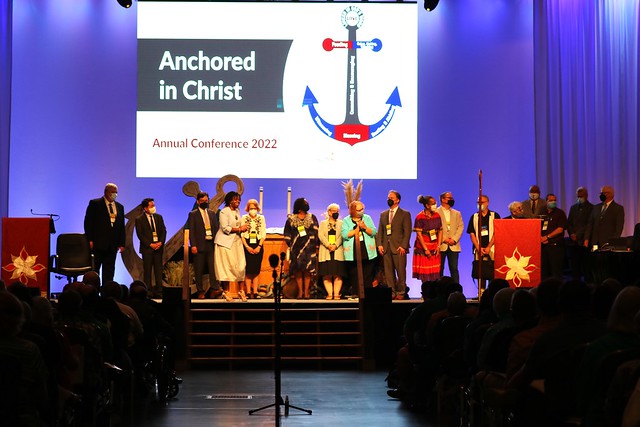