Bishop Cynthia Moore-Koikoi was elected as a bishop of The United Methodist Church by delegates to the 2016 Northeastern Jurisdictional Conference, meeting in Lancaster, PA. She began her assignment to lead United Methodists in Western Pennsylvania on September 1, 2016.

Bishop Moore-Koikoi earned a Bachelor of Arts degree in psychology from Loyola College in Maryland in 1988, and a Masters of Arts and advanced certification in school psychology from the University of Maryland in 1992. She worked as a school psychologist for Anne Arundel County Public Schools for 17 years, serving in leadership roles as a layperson before answering her call to the ordained ministry.

She answered that call while a member of Sharp Street Memorial UMC in Baltimore, her great-grandparents' church and the church which sent her father into ministry. Her husband, the Rev. Raphael Koikoi, served as pastor there until February, 2017, when he was moved to Western Pennsylvania.

The Bishop is familiar with church life and ministry in rural, urban and suburban settings. Growing up in a preacher’s family, when she was in elementary school, her father served a rural hilltop church. Later, they moved to serve a church in suburban Silver Spring, MD, where she went to junior high and high school.

Ordained an elder in 2010, she served on the Conference staff working with churches on discipleship. She later served as district superintendent for the Greater Washington Area, and most recently as superintendent of the Baltimore Metropolitan District. 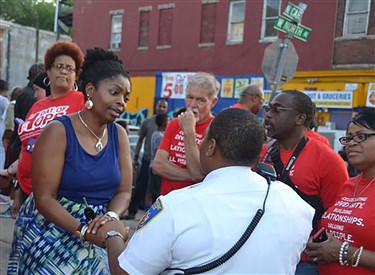 In that role, she played a key spiritual role in the city in 2015 during the unrest after the death of Freddie Gray in police custody. She helped to organize United Methodist churches to open their doors and minister to children and families whose schools were closed, and to meet other basic needs. She became the face of the United Methodist Church, and church volunteers in red T-shirts were visible walking through neighborhoods, praying for and ministering to people.

Bishop Moore-Koikoi says she sees the work of bishops as “overseeing the work of the church, working prophetically, evangelically and apostolically with all as they cooperate with the Grace of God.” A key component of that, she believes, is leaving space for the transforming movement of the Holy Spirit, especially at times when the denomination is divided and many people wonder what the future holds. “That’s spiritual work -- remembering who God is and who God has called us to be,” she said. “We got God, so we got this.”

Bishop Moore-Koikoi said she sees herself as a bridge-builder, clear and confident about what she believes, while respecting others who might not believe the same way.

Her vision is of a diverse church that embraces justice and the life-saving love of Christ. As a new bishop, she’s committed to work for that. It won’t be easy, she said, “but I remind myself, God has got this. God is in control.

Favorite hymn: “Oh Love That Wilt Not Let Me Go”

Favorite sacred song: “Take Me to the King”

Heroes in the Bible and beyond: Lydia, Woman at the well, Julia Foote

Recent book that made a strong impression: “Flourishing: Why We Need Religion in a Globalized World” by Miroslav Volf 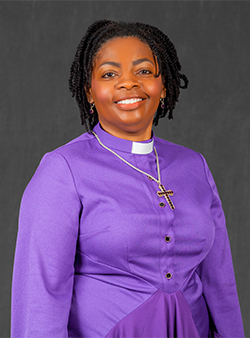